Brides and Grooms, Ladies and Gents,

As many of you know, The Groom Says blog filed an injunction in October of last year, asking that the court issue a restraining order against me for (quote) spending too much time on the blog (unquote), but we all know it had to do SO much more to do with the inappropriate touching.

Nevertheless, I'm ignoring that pesky court order today (and today only) to share news about the Wedding Salon's first event on the year on Monday the 19th at the SLS Hotel at Beverly Hills, where celebrities have been known to stay and drink and dine, and where I have been known to loiter on Saturday nights. (I've had a tab open there since 1997. I was 14 at the time.) 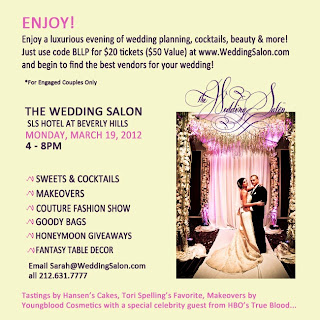 And men -- careful with the Coppola wine. Don't pull a Paul Giamatti. Too many three-ounce glasses and you may wake up the next morning with a restraining order from a yet-to-be-named celebrity from True Blood.

Best of all, the Wedding Salon has been kind enough to give out 10 sets of complimentary tickets to Groom Says readers. So email me by Sunday the 19th (you know the address) and I'll email you back with the code. Please note: I reserve the right to include a suggestive photograph in the email.