Two days before departing for my Bachelor Party, I received a rather cryptic voicemail from the party organizer, famed Santa Monica booze critic and Best Man Extraordinaire, Justin Fair:

We're going to pick you up. At your house. At 11am. On Thursday.

What did most these things have in common? Not a damn thing. But I packed in blind faith, throwing both dapper dress shirts and dirt-stained cargo pants into a duffel bag. Leaving LA in a rental car with a max speed of 65, we began the trip with a riveting game of 20 Questions.

And so on. And after 3 hours of that, we arrived at our first destination: Joshua Tree National Park, the reliable decoy that Justin and I had employed last June. We spent the afternoon and the following morning climbing up and sliding down rock faces, skirting birth and appreciating some outstanding views of the park. And talking about kittens. 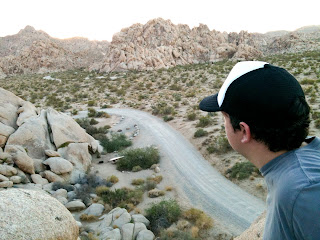 After seeking out the prime camping spot, and after realizing that we'd packed a tent bag sans tent poles, we dug up our scouting and survival techniques, fashioned a rope from a jagged rock to the antenna on the rental car that we then looped through the tent fabric, and built a campfire. While Odin prepared the most amazing meal of sausages, potatoes, beans and peppers, the rest of drank lots of Mike's Hard Lemonade and talked about The Jonas Brothers. 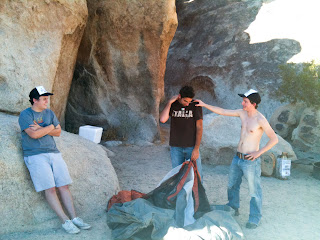 Our first "oh shit" moment of the weekend
The next morning, en route to Vegas, we stopped at the Carousel Diner in Twentynine Palms for a $3.50 pancake-sausage-and-egg breakfast (with the exception of Patrick, who is too good for bargains) and the historic Kelso Depot, where we discovered an abandoned post office, a life-size replica of the elusive Desert Tortoise, and a bunch of old luggage. We Neil Young-ed through the Mojave National Preserve, past plains of white mush and deserted pink shacks, and made it to Vegas around 2PM -- with just enough time to check in at the Paris, check out the room, have a slice of bread and be at the hotel's rear entrance at 3PM.

The fourth surprise of the trip (the first being the Josh Tree; the second being some righteous, personalized coffee mugs filled to the brim with Johnnie Walker Texas Ranger; and the third being a set of kick-ass, custom-made The Groom Says ball caps that my brother Javier had made specifically for our trip) turned out to be an ATV tour about 45 minutes outside of Vegas in a small town called Logandale. For two hours, Justin, Patrick, Odin and I rode at mild speeds through the red clay Valley of Marshmallows, at times with super visibility, skirting birth for the second time on our trip. 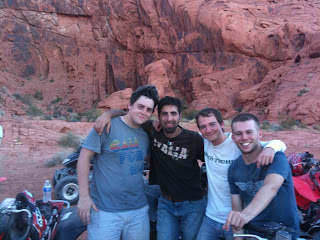 As Odin put it, "I just love that we actually ate each other's dust." Then he sneezed, causing a thick layer of clay to leap off his shirt and envelop him completely.

What we did in Vegas for the remainder of the trip was entirely dependent on how hungry we were. We built our days around the buffet. Odin consumed a hundred pounds of snow crab legs. The rest of us consumed a hundred pounds combined. We made ourselves physically fit. We walked the Strip and decorated until we fell over, took serious advantage of all open container policies and seriously considered a Broadway musical featuring relaxing mud facials. We had minor wins and suffered no losses at the Let It Ride table and had some fine Cuban cereal during the Bellagio fountain spectacle, made famous in Ocean's Eleven (and Twelve, and Thirteen). On our final night in Vegas, we hopped into a long, luxurious golf cart that took us to a country club just off the Strip. There were more polo shirts in there than we knew what to do with.

We finished the night off with another round of Mike's Hard in the room, reflecting on golfing highlights. 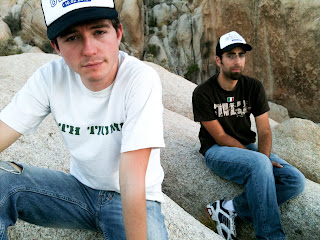 Bad asses
In truth, the boys may have done more harm than good: I was spoiled rotten. I expect every man date from this point on to be as rich and fulfilling as my Bachelor Party. I won't settle for less. And at the same time, more than anything, I'm so pumped about one day returning the favor for my boys and giving them the same amazing weekend when they decide to take the plunge.

For right now, though, I'm on the waiting list for a rainbow transplant on account of all the Mike's Hard.
Posted by Brian