In June, 2E's and I will be attending a wedding in Great Barrington, Massachusetts, for our dear friends, Justin and Gill.

Having known Gill since my freshman year at New York University (we somehow managed to live in the same dorm, choose the same major and sign up for all the same classes), I wanted to take a minute to get to know her fiance before the two of them tie the knot in Gill's old stomping grounds, the Berkshires.

(Justin -- I'm aware that this intro makes it seem like we've never had a single conversation before, which is ludicrous, because we have had several, but the interview is so much more dramatic if you come off as a total stranger. Just FYI.)

The ever-elusive Justin stopped by this past weekend to answer some hard and some not-so-hard questions about some groom stuff. 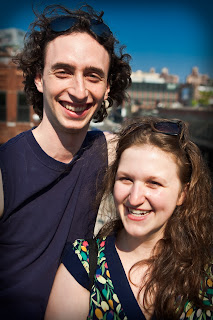 SO JUSTIN... WHAT WAS MORE EXHILARATING: ASKING YOUR LADY TO MARRY YOU, OR CHANGING YOUR STATUS ON FACEBOOK?
Definitely asking Gill to marry me. It was the most exciting thing I've ever done. I don't expect many things to live up to that moment or that whole evening.


WORD ON THE STREET IS THAT YOU AND GILL GOT ENGAGED TWICE, BUT THAT CAN'T BE TRUE!
I have a strong belief in equality. I think men and women should be treated equally in all aspects of life. Gill and I had talked about getting married for a long time. Our engagement was sort of a formality, but even so, Gill was getting pretty anxious for me to pop the question this past summer. A couple of times when she was playfully nagging me, I would say something like, "Well, I don't see a ring on my finger?! Why can't you propose to me?"

TOUCHE, SIR. CONTINUE.
I went away for a long weekend for my brother's bachelor party, and when I got back, Gill had me close my eyes and led me into the kitchen. When I opened my eyes, I saw a banner hanging across the kitchen. It read, MARRY ME?

Gill had a box in her hand that she opened as she gave it to me. Inside was a watch. She said, "I'm giving you this watch because I'm counting the minutes until you propose to me." Some might think she was pressuring me... I see it as her understanding that we will enter marriage as equals.

SO, WAIT -- DOES THIS MAKE YOU MORE ENGAGED THAN MOST GUYS?
I wouldn't say I'm more engaged, but it did show me that Gill's love and respect for me is immeasurable.

THAT SOUNDS LIKE A NICE WAY OF SAYING "I'M MORE ENGAGED THAN YOU."
We decided to say that we were "engaged to be engaged."

PUT THAT ON A HALLMARK CARD. SO THEN THE BALL WAS IN YOUR COURT, OBVIOUSLY...
Well, she didn't know it at the time, but I had already bought her engagement ring about a month before. I had spent the weekend talking with my brothers and our closest friends about proposing. I didn't really have a plan ... I just knew it would happen within a week, and I had a general idea of how I would do it.

Gill suggested we go out to dinner on Friday. When I got home from work, I quickly when to the gym (I had to be ripped in order to propose), and on the way home, I scouted out a couple of gardens in the neighborhood that we could walk through. When Gill came home, I suggested we get dressed up a little and go to Bliss Bistro, a great little French restaurant.

Gill knew what was coming. While I was in the restroom, she texted her friend, I think it's going to happen tonight! When we finished dinner, I suggested a stroll through the gardens, but Gill was taking her sweet time finishing her glass of wine. I rushed her along and ended up downing half of her glass to get her moving.

Once outside, Gill was a little cold--all a part of the plan. I took off my blazer and helped her into it. The ring was in the breast pocket... but, seriously now, how often does a woman reach into her man's blazer's breast pocket?

UMM... NEVER?
So we made our way to a garden a couple of blocks away and stopped to sit on a bench. No one was around ... the night was calm ... and I knew the moment had come. I reached into the jacket pocket and pulled out the ring. Gill was in tears before I could even finish. After a few minutes of her moaning over how beautiful the ring was, I said, You haven't answered me yet. Gill said, I forgot the question -- can you ask me again? I had to ask her twice.

WOULD YOU RECOMMEND DUAL ENGAGEMENT TO OTHER SOON-TO-BE-GROOMS?
Not necessarily, but it can't hurt to let your lady know that she can go after what she wants. She doesn't have to wait for her man to claim her.

I KNOW A FEW CAVEMEN WHO WOULD STRONGLY DISAGREE. IF IT WAS UP TO YOU (NOT THAT IT IS, BUT) WHAT WILL THE BARTENDERS BE SERVING AT YOUR RECEPTION?
I think I'll be happy with champagne, wine and beer. I'm not tremendously interested in seeing a bunch of people get drunk at my wedding. I'll be having a few drinks, and I imagine a lot of other people will too. My days of shots and cocktails ended with college, but you never know...

WHAT CAN YOU PUT ON YOUR GROOM RESUME THUS FAR?
A few weeks into our planning, I told Gill that I wanted to be more involved. Gill and her bridesmaids were so excited about the planning that I was quickly getting left in the dust. So Gill and I took every step of finding and picking our ceremony and reception sites together; then I did all of the emailing and booking of the date. I also paid for the Thai food that Gill and her bridesmaids ordered when they had their Save the Date crafts night. So I think I can put those down as solid groom accomplishments. 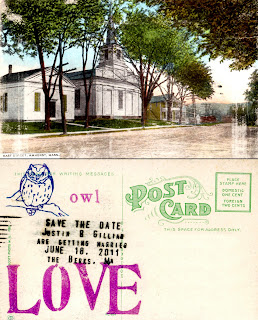 "Gill is getting totally crafty.
I expect nearly all of the decorations to be homemade."

I HEARD YOU AND YOUR BETROTHED ATTENDED A "SURPRISE WEDDING" THE OTHER DAY... PICK UP ANY TIPS WHILE YOU WERE THERE?
Yeah, the wedding we went to was a baby shower and a surprise wedding simultaneously. A lot of what I've taken away from weddings I've attended in the past few months (including yours, Madman) is that more isn't always better. What the bride and groom want is most important, and no matter how big, small, simple or fancy the wedding is, all that really matters is that everyone is together.

ANY TIPS FOR ALL THE FRESH-FACED GROOMS OUT THERE?
Helping with the wedding planning, even a little bit, goes a long way in her eyes.
Posted by Brian