No Sleep 'Til (We Find the Right Venue in) Brooklyn

When consulting bridal magazines, you're told that there are four main options when it comes to location:

Well, 2E's and I added a fifth option to the list:

(A) bride's hometown
(B) groom's hometown
(C) current place of residence
(D) Bali
(E) that borough where you had your first apartment, where you stayed for a year and a half before relocating to your current place of residence ... the borough with the bad connotation because there was that sublet fiasco and you lost like $600 worth of furniture and the tenants were @$$holes but you're still somewhat fond of the place, wouldn't you say, and oh, there's that crazy good pizza place

Brooklyn has great attributes like character and vibe and racism and culture. It's the most populated borough and is home to Coney Island, BAM and some awesome gentrification. For signage purposes alone, Brooklyn is by far our best option. All the walls and buildings are labeled accordingly, so our guests will never get disoriented: 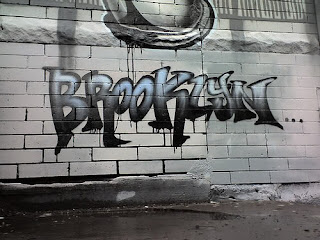 It even comes with it's own abbreviation. BKLYN. That saves three whole letters. That's like $5,000 in invitation costs.

2E's and I have already set aside time to tour three BKLYN venues in our trip to New York in late October. We'll also be meeting with our florist slash designer slash miracle worker as well as hunting down catering companies that accept ladies footwear as payment (we have a few of those around the house that we can part with).

Until then let's reflect on BKLYN's better qualities - the character and architecture and antiquity and gang violence and cityscapes.
Posted by Brian