OK, to be fair, I didn't realize that my most recent post and my three week absence made it seem like 2Es and I had been swallowed by Hurricane Irene ... until now.

In my early teens, while I was climbing trees and raiding refrigerators and NOT having contact with women (late bloomer), my now-wife was having an affair ... with a rather complex stat sheet:

This stat sheet doesn't just come with a man. It also comes with an owner's manual. 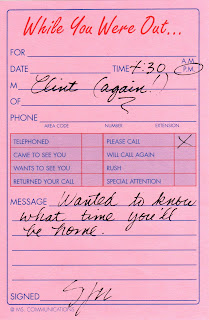 That's right, my better half was engaged in a pubescent relationship with Cowboy Clint, one of eight Boyfriends In-A-Box. Clint comes (as advertised) in a box. And he, like his fellow escorts Firefighter Frank and Athletic Al, comes with a list of vital statistics, a greeting card (which Clint himself signed), a flower sender's card (which Clint himself signed), three missed call messages (Clint is so sad he missed you a third time), and both a 5x7 and a wallet-sized photo. 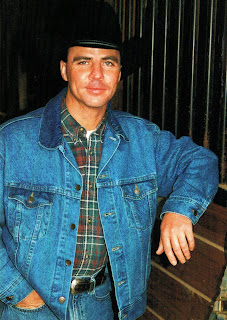 Did I mention he's a cowboy? 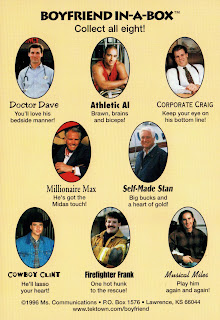 Collect all eight! Herpes not included.

Had it been me, I would have gone with Corporate Craig or Doctor Dave, someone who could provide for me financially at the fragile age of thirteen.


"Your Boyfriend In-A-Box is guaranteed not to lie; cheat;
forget a date; be late; complain when you're late; flirt with
other women; hog the remote; spit; insult your friends; grunt;"
... and so on and so forth.

I guess what troubled me most, stumbling upon Clint's box when we purged our apartment this weekend, was the thought that I might not rise to the high standard that Clint has set. After all, why wouldn't she tell me about Clint before we got married? Why did I have to dig him out of some forsaken memory box and yank the truth out of her? How can I possibly compare to some man in a ten gallon hat and jean-on-jean who doesn't lie and never grunts. I grunt constantly.

OCCUPATION: Groom Blogger
SKIVVIES: Boxer briefs
PERSONALITY STYLE: Has obsessive-compulsive tendencies; no values or morals or ethics to speak of; eats with elbows on the table and loves a good smoothie; kinda weird overall

In short, I'm keeping a close eye on 2Es. The cat's out of the bag and Clint's back in the box. And, help me god, if he sends one more goddamn greeting card...