Justin et Audrey: my BM gets hitched in the land of wine and cheese (Partie Un)

On the eight-and-a-half hour flight from Paris' Charles de Gaulle airport to Philadelphia -- and on the subsequent five-hour flight from Philadelphia to LA -- my fellow passengers and I were consumed by the smell of garlic. I was immediately self-conscious but then thought, Wait, that's not possible. As promiscuous as this may sound, my hands had touched a million things (note I didn't say "a million people") between noon Friday and noon Monday: benches, mud, arugula, hors d'oeuvres, doilies, dish detergent, discarded doors, discarded veggies, two cats, two wedding rings, five Paris Metro railings, ten champagne bottles, dozens of TSA bins, and countless glasses of the most amazing viognier. The idea that I was the source of the smell was inconceivable...

And yet, the odor of a hundred peeled garlic cloves haunted me, stuck to me, boarded this Transatlantic flight with me -- Out, out damn garlic! -- along with just the faintest hint of raw onion.
But I'm getting ahead of myself. Let's rewind a bit.
- - - 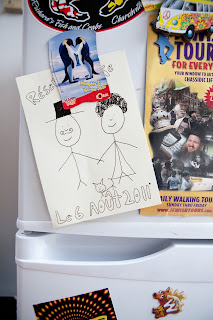 Justin and Audrey met in a classic film poster and bookstore on Hollywood Boulevard in the spring of 2010; Audrey was visiting Los Angeles at the time with two friends from France. (Pas une coïncidence.) They played pen pals for several months, sending each other gifts and postcards and YouTube links, speaking occasionally by Skype at 2am PST. Shortly after 2Es and I tied the knot on October 2nd, Justin visited and soon after proposed to Audrey in France. And just over nine months later, the two were married (see J's hand-drawn invitation above) in the Moselle province in Saint Hubert -- a village just thirty minutes from Audrey's home in Metz. There is nothing traditional about their road to marriage, and (likewise) there was nothing traditional about their rain-soaked, homemade August wedding.
As I mentioned in my rehearsal dinner toast, I've never known a bride to welcome two complete strangers into her apartment the week of her wedding, let alone allow them to dominate the living room. But because the French don't believe in stress (le stress), Audrey permitted Odin and I, International Co-Best Men, to crash on her spacious sofa and spare the expense of a hotel room. Occupying the modest apartment in the days leading up to her wedding were Justin, Audrey, Audrey's one-of-a-kind roommate Baptiste (who is both appropriately and inappropriately nicknamed "Uncle Boobs"), two Americans with little to no French under their belt, and Django. 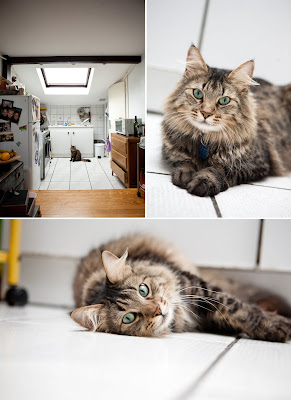 Django traded room and board for this photo shoot, which he later described as "suffisant"
I arrived a day later than expected due to an incident with a suspicious odor (no, not garlic -- sulfur) on the first leg of my trip. I met Odin at CDG; together we bused to the Gare de l'Est station and took the hi-speed rail to the northeast corner of France; and when we rendezvoused with the bride and groom on the Gare de Metz train platform, they led us down cobblestone streets between pre-war buildings to Audrey's 4th floor apartment. I unsuccessfully convinced myself that I was both alert and prepared for a tour of the city before passing out on the couch for god knows how long.
Over the course of the next five days, Odin and I would discover the secret to the romanticized French lifestyle: bière et cigarettes at any given pub or restaurant, followed by a leisurely stroll (toujours avec la bière et les cigarettes) down worn and weathered alleys bathed in pools of auburn light, retiring no earlier than 4:30 in the morning and waking up no later than 8. Recovering from a trip to France involves a great deal of sleeping -- and no, it isn't the jet lag.
We spent Thursday afternoon with les Américains -- namely, Justin's family from Maryland -- exploring the city, eating pasta, drinking beer, walking down the fleuve de la Moselle (the Moselle River) and through the Centre Saint-Jacques, and futzing with a life-sized chess board at Metz Plage, the city's "built-in beach" throughout the month of August. Then we scurried to La Brasserie FLO for the dîner de répétition, where the crowd was half American and half French, and where the intermingling of those distinct halves was prompted with flowing beer and wine. 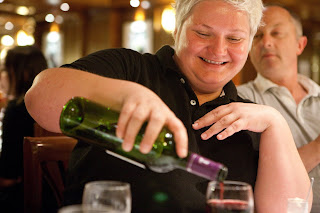 Bridesmaid Nathalie kickstarts the intermingling
I woke up the next morning at an unfriendly hour to an empty apartment (even Odin had scampered off somewhere), so I shaved and showered and dressed while Django terrorized a plastic hair band. Audrey and Justin returned to the apartment -- appearing somewhat frazzled for the first time that week -- and asked if I wanted to go with them. We were headed to their wedding site, though I didn't know it at the time. We raided a neighbor's refrigerator, packed the trunk and corners of the car and filled our laps with a month's worth of groceries, wine, a keg and a Co2 tank and drove half an hour outside of Metz to a farming village with a population of maybe eight. 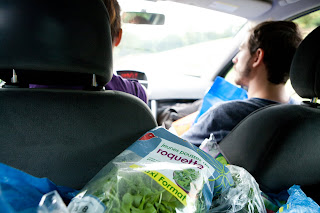 Justin and the Roquettes
The groom put us to work immediately and gave us various chores in the kitchen -- including but not limited to peeling, dicing, chopping, washing, cleaning, dressing, food processing and saran wrapping. 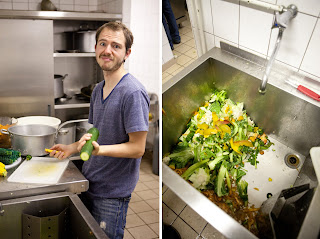 Groom Justin getting his hands dirty -- and the remnants of his labor.
We would use a dish; we would wash a dish. Even the industrial-sized kitchen we had been blessed with was struggling to keep up with us. 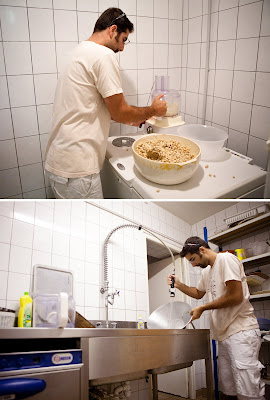 Odin prepping a monster bowl of hummus
unboxed shit. We put up signs. Audrey pointed, and we worked.

In a matter of hours, we had turned a fridge full of groceries into five shelves of prepared dishes. 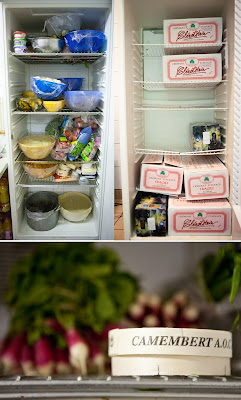 At a certain point, Odin turned to me and said, "Dude, it's 9 o'clock." I almost said, "A.M.?" Bride, groom, co-best men and a few friends had worked for nine hours straight. Most of us didn't get out of there until 10:30 in the evening; Uncle Boobs stayed behind to arrange some architectural lighting in the space.
And it was right around then, or maybe on the drive back to the city, that I discovered what the whole Best Man thing (Co- or not) is all about -- realizing that it had so little to do with standing up at the altar, or about handing off the rings at the right moment. It's about rolling up your sleeves in the 48 to 72 hours before the ceremony and doing whatever needs to be done. It's about keeping the groom's head in a good place and keeping the mood light and the music loud. And it's about dragging the groom kicking and screaming out of the reception hall on the eve of his wedding when he says that he wants to stay for like two more hours and get more stuff done.
We went out that night, no surprise, and met Baptiste and Justin's friend Matt at a bustling pub near the town center. We closed the bar and got kabobs and (French) fries and meandered through Metz, which is both eerie and perfect at that hour. We came across a pop-up badminton game in a plaza and shot the shit until (again) 4:30 in the morning and toasted our friend with each round of beer. We sat on the steps of old buildings and discussed politics and economics and peed in the street, and then we put Justin to bed. He was getting married in twelve hours.
- - -
Stay tuned for Part II -- coming Thursday! Revenez jeudi pour la Partie Deux!
Posted by Brian