The eight o'clock alarm sounded in all three rooms simultaneously, and the unspoken fact that we (we being three groomsmen and the groom himself) got at best 3-1/2 hours of sleep just hung in the air. We were visibly exhausted. I pulled Justin aside and told him, Don't worry dude. You are superhuman on your wedding day. You have the strength of ten men. Ten strong men. Not weak men like us. You're gonna be great. Don't fall asleep. My breath smelled like last night's canned beer.


CLICK HERE TO READ
PART ONE OF 'JUSTIN ET AUDREY'
Odin dragged me into the supermarché to grab a quick breakfast, and while we were in line, we put the finishing touches on our toast, which (because we're both creative individuals) had assumed a number of shapes, sizes, colors and one-liners over the last few weeks. We had decided that we would do separate rehearsal dinner toasts and a combined wedding toast, opting to keep the latter short and sweet. We finalized our plans, ran back to the car -- croissants in hand -- and headed up to the reception space.
Upon our arrival, Co-Best Man and I immediately got to work on the ceremony arch; we consulted with Justin on location, dragged our asses outside and got to work. Our onlookers on the other side of the barbed wire fence were pleased to point out our mistakes as we toiled over various lengths of white tubing. 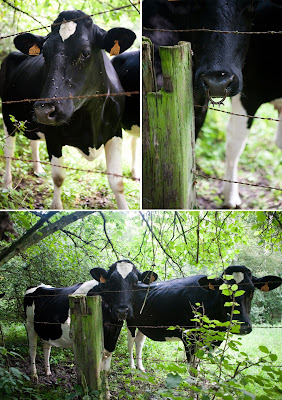 wedding crashers
It all seemed so manageable -- with the four of us plus Justin's friend Matt and Groomsman Vince pushing through the to-do list -- but at the same time, it was an insurmountable amount of work: decorating the arch; pulling the ceremony benches out of storage; jumping on said benches to plant them in the uneven ground; wiping the mud off of them after said jumping. And then ... setting up the keg. Arranging the escort cards. Folding menus. Preparing hors d'oeuvres. Fastening paper flowers to low-hanging tree branches. And so on.

And then, as it was just beginning to take shape, it began to rain.

I don't want to make it sound more tragic than it was. Bride and groom had been planning on rain for over a week now, so this was no surprise. But with the change in weather came an extended to-do list, which involved turning a reception space into a ceremony slash reception space.

Homemade details: escort card doilies; ceremony backdrop; hand-drawn, fold-out menus; gift (mail) box; and wedding favor name tags
I kept an eye on the clock and gave Justin a "hard out" time of 2:15, as we still had to return to Metz, freshen up, grab our formal attire and get back here before 5. We had 45 minutes in Metz, and in that 45 minutes, Justin and Baptiste would shower, I would iron (typical), and Odin would run over to the supermarché to pick up lunch, paper towels and soap. We had an agenda. And we had a very small window of time.

More homemade details: a Polaroid camera w/ mini prints, literally dozens of disguises on sticks, and a guestbook filled with the best images and quotes imaginable
An hour later we were back in the car and back on the road and headed back to Saint-Hubert, where we would have about 20 minutes to complete the transformation from men to groomsmen, from "dude" to "groom." Odin and I stuck Justin in a room upstairs and then ran downstairs and through the reception space, through a throng of guests (all in formal wedding attire, all wondering what the hell we were up to) and into the bathrooms, which were also equipped with showers. We spent five minutes finding the light switch and another five just soaking ourselves with hot water. We didn't have towels (and the paper towels that Odin had purchased were still upstairs), so we dried ourselves with the clothes we were just wearing and then ran through the rain and mud (because now it was embarrassing to run through the field of guests, now that we were in undershirts and socks) and up to the second floor, at which point Justin brilliantly blurted out,
Thanks for showing up, guys. I'm getting married in 5 minutes.
[cliquez pour agrandir] 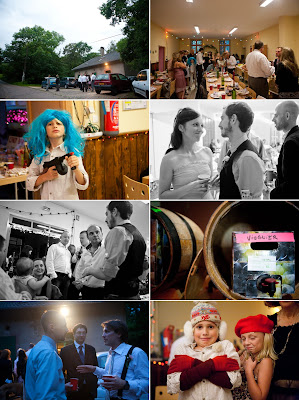 This collage does no justice
But then it was strangely perfect again -- like the feeling I had walking down the streets of Metz at dawn, at once enamored with the scenery and at the same time fairly certain that I was going to get mugged. We were rushed and it was raining and our dress socks were caked with mud -- and crap, the snaps on these goddamn suspenders just won't snap -- but it worked. We were in this bunk room of sorts, with fifteen single cots topped with bedspreads and metallic "homeroom" lockers on the near wall. Six men (two American, three French, and one soon-to-be French-American) using each other as mirrors and fussing with the JCrew ties that Justin and I had picked out months earlier. In that moment, it just came together. 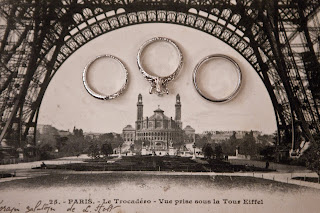 Justin went on into the space while the rest of us huddled in a room near the main entrance -- the bridesmaids, the groomsmen, and ring bearer Paul -- and fastened our boutonnieres to our suspender straps and then made our grand entrance ten minutes later. The procession was quick, and the officiant -- a young politician, hair cut short, wearing a sash -- asked us all to sit. I swear he said something about Charlemagne discovering Saint-Hubert but the rest went right over our English-speaking heads. When prompted, we passed their rings from person to person, holding them in our hands and blessing them while the ceremony carried on. And after the officiant read out the names and occupations of the entire wedding party, and once the dozen of us had signed a document that said -- well, I have no idea what it said, to be honest -- then Justin and Audrey were officially Justin and Audrey. 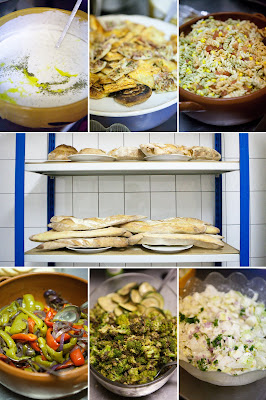 We had our hands in everything pictured here -- and no, we didn't wash them in advance
Mission number one was ensuring that J&A were not working during their own wedding reception, so Baptiste and I hustled into the kitchen and passed hors d'oeuvres and stocked the bathrooms with soap and towels while some burlier men figured out how to move the keg and Co2 indoors without disconnecting the cables.
We ate and we mingled and at some point Odin and Baptiste took off to pick up the pigs and returned 90 minutes later, having taken a wrong turn down a dirt road (no fault of their own) and then waited for the "pig man" to pull the pigs off the spit and wrap them in foil. 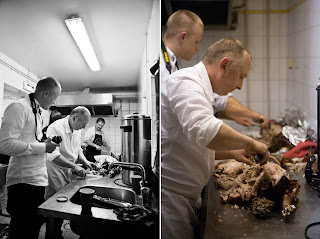 Even the vegan couldn't help but observe the cultural celebration that is the pig carving. You'll find the FOG in the background of the b&w photo above, putting his butchery skills to work.
We ate more and danced to primarily American Billboard hits. Toasts were made and champagne was had and cigarettes were smoked and Justin performed a three-song medley as a gift to his new wife. A cheese cart was wheeled onto the dance floor, along with some righteous cakes made by 18-year-old dessert prodigy Valentin. And at some odd hour of the morning, I assumed the role of DJ and got a small group back on the dance floor for the next couple (?) hours. Someone kept refilling my champagne glass, and I swear to god it wasn't me.
It could've been 4am when I called it quits; it could have been 6am. All I know is, Odin said I had this scary look in my eyes as I sat alone outside the bunk room. Of course, I explained the next morning, my BVC (blood viognier content) was through the roof.


Descending the stairs the following morning, looking (I imagine) like a lesser and more hungover version of myself, I found an entire crew of people cleaning up the chaos from the night before ... the "crew" being a fourth of J&A's guests, some who had been up since 7A.M., and others like me who had been avoiding the inevitable and only recently rolled out of bed. I mumbled bonjour to a few people, found Justin, ate a banana and got to work again.
Over the course of the next few hours, we returned the space to its original condition -- as if we'd all done it a hundred times before. Then we all went outside and sat down at wooden tables (cows in moo-ing distance), set out glassware and china, and made a small dent in last night's leftovers. More toasts were made; costumes were donned; and we celebrated Baptiste's birthday in rustic style.

The traditional American "brunch" the morning after a wedding never seems deserved; a bunch of people who pigged out the previous evening agree to meet up ten hours later and pig out again. But this was different. This new family, loosely connected by Justin and Audrey, had labored for hours to restore order to the Saint-Hubert reception hall, and this was our reward. This made perfect sense. 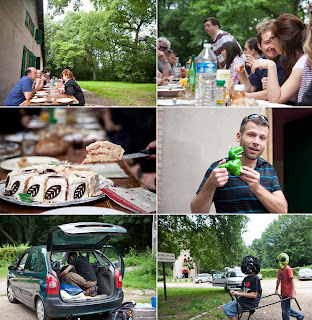 la famille
Dishes were washed (again) and cars were packed and farewells were said, and we departed for Metz in the mid-afternoon. Odin and I threw our clothes into our suitcase and duffel bag, respectively, and Uncle Boobs accompanied us on the 10-minute walk to the Gare de Metz, where J&A were waiting for us. The five of us lingered on the train platform until the last possible moment, reflecting on a rather unbelievable week, and then we boarded and were gone.

Audrey's friend Carole was kind enough to lend Odin and I her pad for the evening in Paris. We took a short walk in the rain, ended up at a wine place, and I disappointed a waitress when I asked, in a further disappointing French accent, if we could have two glasses of the cheap one? I blew my last remaining euro on a large glass of something-or-other. Seven hours later, I woke up, showered, left the flat, boarded two trains and a shuttle, spent an hour with an array of French TSA officials, and made it to the gate with time to spare.

And on the eight-and-a-half hour flight to Philadelphia, when the sweet stench of garlic and red onions set off some kind of alarm and caused a premature landing in the middle of the Atlantic Ocean -- inflatable rafts and life jackets and all -- I knew that it was worth it.