Last Monday, my new friend Alison at The Knotty Bride brought up a "real bride issue": brides' satisfaction (or, in this case, dissatisfaction) with their groom's proposal. It's clear Alison's hit on a sensitive issue, one that 30+ women have weighed in on in the past week.

Were you absolutely thrilled with the way your marriage proposal went down? Were you in any way disappointed, but possibly feeling guilty about feeling that way? On the flip side, do you feel that there’s undue pressure on men to perform up to the standards set by videos you see showing incredible proposals caught on film?

The first two questions are important, no doubt about it, but as a groom blogger, I'm of course primarily concerned with the last. Are grooms under unfair pressure to deliver a kick-ass proposal? Do men need to plan and execute a proposal "story" worthy of years of bragging and boasting? I decided to throw my own two cents in -- plus give voice to some men who've been through the process. Enter Earl, Tim, Josh and Hunter.

EARL: We put so much pressure on ourselves, don't we? The proposal, the wedding, the wedding night, honeymoon, gift registry, seating charts and so on. Why is it that the Marriage itself seems so unimportant during all this activity? 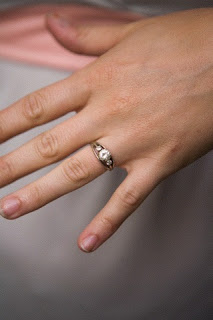 Why do proposals matter to begin with? Well, popping the question kickstarts the wedding process, so that's part of it; and for some (women), it's a measure of how much your partner loves you. The trouble is -- can men actually buy into that philosophy? Does the size of our love correlate with the size of a ring, or the size of the proposal?

HUNTER: The proposal should be something that is a personal moment between you and your wife. It's not about impressing her; it's about making her feel like the most special person in the world. It's time to look inward and get creative.

Hunter's right. Or Hunter should be right. "Personal," "special," and "creative" seem like the right elements for a memorable event. "Impressing" should be an added bonus, right? After all, we can't determine what will or will not impress. We can't read minds, sadly.

TIM: [The proposal didn't need to be] hugely elaborate, but I felt like it should be something more than just a, "Hey, by the by, you want to, you know, get hitched?" I felt like it had to be a little more impressive than that.

JOSH: One kick ass proposal earns you a lifetime of points ... or at least a year and a half's worth.

Our expectations (for women) and assumptions about those expectations (for men) are shaped by so many things, it's altogether impossible to create a rubric by which to judge proposals and thereby qualify them as good or bad, fulfilling or disappointing, impressive or ... less than so.

EARL: Just the fact that we deal with weddings almost every day puts added pressure on us both. We hear about proposals at every appointment. Brides love to tell their stories, and we love to hear them ... but it adds to the performance anxiety.

At a certain point, we men have to ask if women even know what goes into the planning of a proposal: the secrecy, the family approval, the cost, the ring, the timing, the logistics, the contingency plan, the (optional) recording of the event, and so on and so forth.

HUNTER: How long I spent planning the proposal is a joke in my family because I decided the day I was going to propose about 10 months before I did it. I wanted to do it on the 5 year anniversary of our first date in the fall ... but I decided that in January. Of course that had to be the year all my friends proposed, so Dana got to watch everyone else get engaged and wonder what the heck was wrong with her man.

It's not uncommon for women to pick a special date or occasion and assume that it's going to happen on that date -- telling their friends, I just have a feeling he's going to do it! (For our Legally Blonde fans, we'll call this the "Elle Woods syndrome.") This doesn't directly add to our stress, but it will inevitably fuck with our minds if things don't go according to the events as they play out in your head.

TIM: I also wanted to propose on New Year's Day.  That felt like a good day for popping the question.

Then there's added pressure from proposals popularized by YouTube, The Today Show and all forms of social media. If Ann Curry tells us it's romantic, we figure we owe our girlfriends/wives at least that much.

Throw in the nerves bit, and we've got all odds against us. The anxiety alone is enough to drive any sane person into a state of paralyzing terror. For several (or, in Hunter's case, 10) months, we've had this secret on our hands -- and this pricey piece of jewelry in our pocket -- and then we have to explain, in a matter of seconds, why we want to spend the rest of your life with you. That last part isn't hard, by the way, but it's comparable to writing vows. Times ten. You want those words to be stellar. You want them to be "personal," "special," and "creative" ... and perhaps "perfect."

EARL: All your partner really wants is the romance. It doesn't matter if it's a man or a woman. Unfortunately, romance is defined differently by every partner. Your job, if you choose to accept it, is to find out what romance means to your partner. Easy peasy.

Peasy for some, not so peasy for others. Ladies know this: some men get romance, and others just don't. Some men know how to relocate a Starbucks interior to a wooded area to resemble a first date, and some can stage and choreograph a song and dance in the middle of a park in New York; other men, as one bride commented on Alison's post, will pop the question in the frozen meats department at Costco.

EARL: This was the second "trip" for Leslie and I both. Thank God her Ex didn't rent a hot air balloon in Paris and propose under the lights of the Eiffel Tower while Train performed "Marry Me" in the balloon with them. I went for the romantic spontaneous approach, I woke her up at midnight on our anniversary and proposed while she rubbed sleep out of her eyes.

JOSH: I definitely [felt the pressure] ... but it was more pressure I put on myself. Honestly, pulling off a kick-ass proposal was as much for me as it was for Alyssa. You get one chance to do it, and now we both have this story for the rest of our lives.

HUNTER: She was of the mindset that, if I like it, then I should put a ring on it. Anything more was gravy. But once you make a turkey the gravy is easy and it makes it so much better ... OK, that may have been the worst romance analogy ever.

Of the four men represented here, one staged an elaborate get-together and dinner with both families; a second took his bride to Mexico for a surprise beach trip; another changed his plans last minute and popped the question on a bitter cold morning in Astoria, Queens; and the last shook his wife awake in the middle of the night. Each proposal is romantic in its own personal, special and creative way. Ask any of them (because I neglected to), and I imagine they'll say that none of their proposals were perfect by any means. But all had some idea what their partner expected and what "big gesture" they were capable of. And none of them pointedly blame their wives or women or wedding bloggers or even society at large for the undue pressure they may have been under.

(A) You know your man, so be realistic about your expectations. If his idea of a date is running errands and then going halfsies on a deli sub, then know that you may not get that hot air balloon ride over Paris.

(B) Tell your guy if you have certain expectations, like I would like my parents to be there when "it" happens, or I don't want it to be a big spectacle event.

(C) But don't make specific requests, not about time or place or execution. And don't hound -- it's not motivating.

(E) And hey, if you have a specific vision about how things ought to play out, maybe you should forgo the traditional proposal and do what Gill and Justin did and propose to each other at separate times. It worked for them. Just requires a conversation beforehand to iron out the details.

If the proposal is in fact our way of showing you how much we love you and want to marry you, then let it be that: our way, inspired by you. Therein lies the romance.


- - -
THANKS to Earl, Hunter, Josh and Tim for their input
THANKS to Alison for the inspiration
- - -
to read more about the drama behind proposal planning,
read through my own proposal story:
MY SIDE OF THE STORY
Posted by Brian