Nice to Meet You. Now Let's Get You Two Married.

Bridesmaid-with-a-Mission Julie sent me the following NPR article this past weekend, knowing full well that it would inspire me to write something (offensive) on the topic.

In the article, Wenner points out that more couples are asking friends and relatives to officiate at their weddings than ever before. 2E's and I knew that this was a trend we'd want to partake in the moment we were engaged -- it was a no-brainer. Neither of us are religious (we tend to lean toward agnostic theism), and we felt that asking her uncle to run the show would be more in tune with our personalities and the tone and feel of the wedding as a whole.

Let me just put this out there -- I have nothing against pastors and priests performing ceremonies, esp. when the couple has known that person and relied on him/her for spiritual guidance for years and years. In those cases, it's not only a sensible but a tangible connection; the guests can sense that there is a unique bond between these individuals. Plus, I've been to several weddings where the Father has thrown out some dark, borderline offensive humor, and I am ALL about that. Dirty jokes are best told in white collars.

But I do have a problem with the Reverend James Wind's comment on the issue:

"When we do a wedding ceremony, there's a set of values that has been carried along for centuries in these religious communities that are resources for making this very important relationship, a bedrock relationship in our society, for making this work."

I don't know about the centuries of "religious communities," but I do know the essence of community, about being surrounded by people who love and trust in and care for you, people who have your back, people who have seen you at your best and your worst and think nothing more or less of you because of it. What could be more important? Are those not the bedrock values that are going to sustain a marriage?

In today's world, when the attitudes toward religion are at both extremes (those who adhere to it without hesitation, and those who question its very purpose), we can't deny that friendship and family are as critical to some as faith is to others. Is it not our family and friends who will help us get through the worst of times, who will comfort us when we experience loss or heartbreak or disappointment, who will help us stay grounded when we feel anything but.

The person who marries 2E's and I will not be a man or woman who we've just met, someone who may know us fairly well from our answers to a template questionnaire. It'll be someone who knows us well, knows us both as individuals and as an "us," and will give us the strongest foundation possible to begin this new life together.

As for the appropriately named gray area -- or the legal issue -- it's a debate I'd love to engage in. It brings us to some much larger questions: "Who should be permitted to perform marriages? Are our marriage laws old-fashioned, or based on ancient principles?" The states with the toughest marriage laws allow for clergyman, clerks, state officials and state judges and justices to perform ceremonies. What do these individuals have in common? What common thread ties them together? When did legal marriages and religious marriages become one entity?

Damnit, NPR, now you've got me all worked up. Ugh. Let's close with a relevant, off-color cartoon. 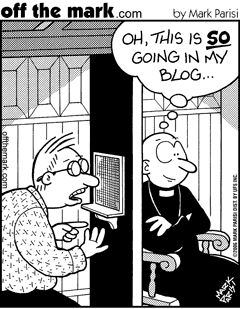