What's your take on boudoir sessions as gifts for hubbies? What do you think of them being published online for the world to see?


As many of you know, 2Es and I run a modest photography business in Los Angeles, specializing in portraiture (children, families, engagement shoots). She's the true talent, and I pop in now and then to assist and art direct and sometimes suggest an alternative angle.
I think it was three years ago now that 2Es shot her first boudoir session with an acting colleague. Meg had approached her in private, telling 2Es that she wanted to do something special for her husband for their 5-year anniversary. I had never heard of such a thing. "So - um - I guess I won't be assisting you on this one."
"No, you definitely won't," she said. 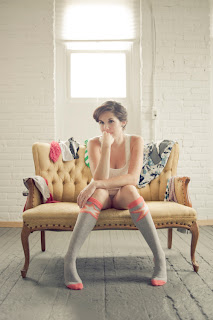 Rock-out boudoir ... via Rock n Roll Bride, © Live It Out Photo
Do I think the boudoir shoot makes for a great groom gift, or a great gift at any point in your relationship? Absolutely. Especially when the groom would least expect it. Especially for brides who are typically reserved and conservative and would never find themselves in a Maxim-style photo shoot.
(Okay, maybe a little classier than Maxim.) 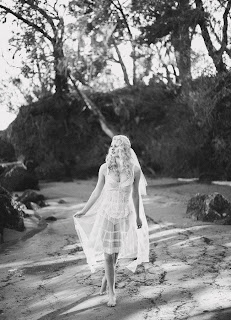 Beach Boudoir ... via Green Wedding Shoes, © Red Leaf Studios
(Okay, maybe a LOT classier than Maxim.)
And on the issue of publishing them on bridal blogs, for "all the world" to see (the "world" being thousands of brides and dozens of grooms and the occasional perv who browses wedding websites) ... I think it's an important discussion to have. In this groom's humble opinion, the guy should definitely be consulted before the photos appear on the front page of the 100 Layer Cake blog.
But I think too that grooms should keep an open mind. I could predict that a natural reaction for most guys would be to protect their better half ... to protect her from the "horrors of the internet," to maintain some kind of privacy, to keep something sacred. But in a world in which Katy Perry's breasts have made more magazine covers than the Dalai Lama, I don't believe much is sacred.
Well, marriage is. Marriage is sacred. But a dozen bedroom pics of your lady in her lady-skivvies isn't going to taint the sanctity of marriage, no matter how conservative you may be (politically or in the bedroom). 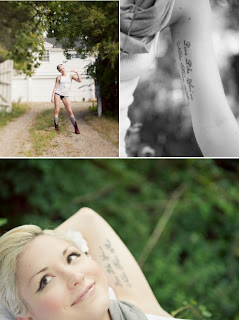 Abandoned mansion boudoir ... via Brooklyn Bride, also © Live It Out Photo
More importantly, groom, a big component of the boudoir session is empowerment. And for those women who see their photographs and see in those photographs a beauty that they haven't seen before, sharing them with the world wide web (pervs or not) might be a huge (and hugely important) act of self-expression -- and self-worth.
You won't see 2Es' photos of Meg on this blog or her blog or any other because Meg had no intention of publishing those images or sharing them with anyone but her hubby. For her, undressing in front of a photographer/acquaintance was already a boundary-pusher. For others, that won't be the case. 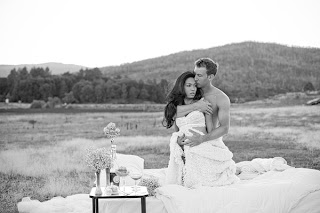 Couples boudoir ... via The Knotty Bride, © Acres of Hope Photography
HiLLjO - thank you, not only for the inspiration for the post but for the inspiration for a photo shoot we now have "in the works." I will say nothing more about it ... except that it will further solidify how I feel about publicizing the highly personal. Let your imagination go where it may.
- - -
If there's something you'd like to Ask the Groom,
email me by clicking HERE.
Posted by Brian