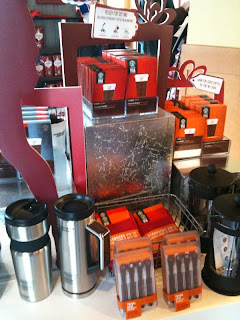 After ordering my holiday-inspired Peppermint Mocha yesterday morning, I stood by the promotional table they had set up at my local Starbucks, admiring the "VIA" Ready Brew instant packets and gift boxes.

Later than night, at the drive-thru window at In-N-Out Burger, the pubescent girl at the second window asked if I would be "eating in the car tonight." With a boyish embarrassment and a pinch of intrigue, I said, "Yes...?" She proceeded to hand me a paper placemat and a small, rectangular cardboard box, designed for ideal in-car consumption.

Sometime between these events (and perhaps partly inspired by Jason Reitman's Up in the Air), I realized that 90% of our daily life comes with a to-go option. Morning coffee, lunch, dinner. Entertainment. The dustbuster we own is essentially a vacuum on-the-go. Our laptop ... a desktop on-the-go. When I was a teenager, my mother and I graduated from Sunday mass to an occasional visit to the small, rotund Chapel in Coral Gables. I loved the Chapel. The Chapel was church on-the-go.

And so I imagined what a wedding on-the-go might be ... what that would entail, whether it would be more or less complicated, and (most importantly) what it would be called.

Giving it a name

1. I figured airport-favorite Chili's To-Go was a good place to start. It's clear and direct. It's Chili's, but To-Go. Makes sense.

2. But Starbucks' VIA brings up a good point. You want an international and cultural appeal. So perhaps we'll change the To-Go part to Vamos. I'm all about Spanish influence.

3. Last, we want to be sure to give it a hip, cool vibe. If we were marketing this, we wouldn't want to leave out the 16-21 demographic. So let's take the word Marriage and teenage-ize it. For instance, let's do what rappers do and take all the vowels out. Marriage. Mrrg. Yes.

OK, so we have our brand name: Vamos-A-Mrrg. Now all we need to do is figure out how it works.

Figuring out how it works

Here's the pitch. Let's say you and your 2E's want to take off for the weekend and get married ... only you have this thing about municipal buildings and she's not the Vegas-type. And your budget is whatever you can scrounge together from sofa cushions and that Ziploc bag marked LAUNDRY QUARTERS.

What you need to do is pack an overnight bag (preferably carry-on) with only the key ingredients for a romantic eloping getaway, which would be:

a laptop - on which you can plan out the weekend, send out last-minute invites, register for gifts online, get an island native to register as an officiant, update Facebook status and upload photos

clothes - this season is all about anti-tradition, so neglect the dress and the suit and instead pack matching white t-shirts and blue jeans

the rings - there are millions of things -- thousands of them household items -- that have a ring shape, so find two of them and pack them

catering - you can't trust the local dives, so pack some fruit, granola bars and canned foods (and bring some for the island native, cause god knows you aren't paying him)

the accommodations - on a $12.38 budget, you and your bride won't be staying in the Royal Hawaiian Honeymoon suite ... so roll up that sleeping bag for 1 (which we all know can fit 2) and lash it to the bottom of your knapsack boy scout-style

condoms - if you're on that tight a budget, you're not on birth control

Branching out and making $ off of it

Eventually we would want to market the idea on a grand scale, providing not only the concept but the overnight bag itself. Going for a sleek look, we'd probably want to base our design on the McDonald's apple pie container. 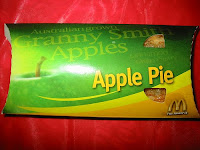 It's hip, recognizable and easy to produce. Plus, everybody loves the two concave ends. We don't know why they're there, but it makes us feel warm inside ... which will be the tail end of our new slogan.

Get Mrrd in a Hurry. Feel Wrm Inside.