if only we owned this city

Faithful reader, bridesmaid and longtime friend Julie has inspired me this morning. After reading this weekend's post, Julie decided to join the enthusiastic masses and send in her own #venuegate suggestions ... which included, most notably, a ceremony on "the sketchiest stretch of 16th street" (between 9th and 10th avenues) and catering by the legendary Hale & Hearty Soups, which may or may not have New England Clam Chower on the day of the wedding (based on availability).

For the past month I've been assembling a list of both practical and impractical venue options. Here, like it or not, are three of our favorite impracticals: 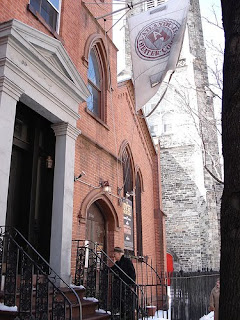 2E's and I are both graduates of the Atlantic Theater Company Acting School, one of the private "studios" linked to NYU's drama department. ATC's primary theater (The Linda Gross) is located at 336 West 20th Street between 8th and 9th avenues, a gothic revival church that was renovated, remodeled and converted into an Off-Broadway house over 20 years ago but still bears the elegance and (naturally) the theatricality of a century-old chapel. To be married at the ATC theater -- with its brick facades and red plush seats -- would be otherworldly.

The reception would have to be at the now overly trendy Chelsea Market, 19th century home of the National Biscuit Company, and now home to tourist-friendly shops, bakeries, restaurants and a wildly out-of-place Anthropologie outlet.

Why is it unrealistic? Well, despite our dual connection to ATC, as actors we know too well that a theater company cannot book out their space months in advance, especially when our nuptials might interfere with their matinee and/or evening performance. Too, we would have no control over the look of the space. For all we know, come October, the Atlantic could be producing Duncan Sheik's new Guantanamo: The Musical, with blood-stained orange jumpsuits adorning the walls and ceiling. As for Chelsea Market, well, I'm sure it's "do-able," but I would need to begin hunting down wedding investors.

Most of us are familiar with the concept of the "pub crawl," but for the sake of those who aren't up-to-date on British slang, let's consult UrbanDictionary.com:

A pub crawl is where a group of people will try to visit as many pubs as possible in one night, having a set number of alcoholic beverages in each. 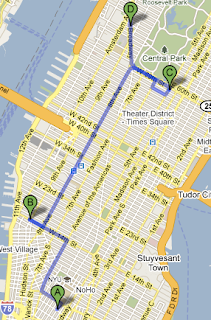 In this exceptional but impossible scenario (financed by Steve Jobs himself), 2E's and our guests and I would "crawl" from one Manhattan Apple Store to another.

Working our way uptown, we would hit each of the Peter Bohlin-designed structures throughout the evening: a SoHo store wedding, 14th Street cocktails, 5th Avenue/Central Park South reception, and the brand-spanking new Upper West Side after party/Sunday morning brunch.

I originally thought we'd walk from one location to the next, but in that scenario, I see most of our guests collapsing on or around 23rd street.

Why impossible? Well, I don't know Steve Jobs, and I doubt I ever will. But if I did know him, and I approached him with this idea, I can picture him, sitting across from me in his simple black turtleneck, smiling, saying, Hey, Madman, you know I love you, but this is the stupidest idea I've ever heard. Let's go get some coffee and try to forget you ever said anything.

I've never been impressed with the big historic event venues -- The Plaza, The Metropolitan Club, NYPL, the St. Regis, the Mandarin. It's the Manhattan you'll probably see in Sex and the City 2: Unnecessary Opulence in a Time of Recession, but it's not the one that we call home. I tend to lean more toward the unique, unexpected venues as opposed to the traditional ballrooms that are booked three years in advance.

In this scenario, I would treat our guests (90% out-of-towners) to both Manhattans. Our rehearsal dinner would take place in the West Room at the elite Per Se -- part of the Time Warner Center in Columbus Circle -- with a customized chef's tasting menu. After dinner we would move on to Dizzy's Club at Jazz at Lincoln Center (in the same glass complex) for an intimate evening of jazz planned just for us.

Our Water Wedding the following evening would take place above and below the two rivers that bound the island of Manhattan: the ceremony on the Brooklyn Bridge walkway (seen our website intro page?) and the reception on the other side of the island at the midpoint of the Holland Tunnel. Sure, it's a concrete block surrounded by water, but add some up-lighting and a few strategically placed yellow cabs, headlights giving a whitish glow to the dance floor, and it's an event space. 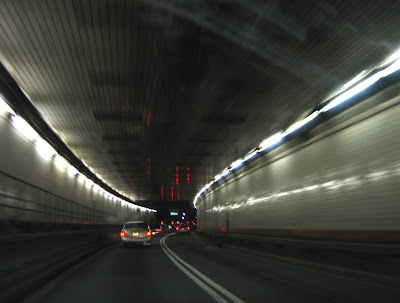