You know you're a groom when...

...your midday fantasies start to go to pieces. It's just a sign that your bachelorhood is going to pieces. That you're slowly losing control over all things, even those things that happen only in your mind.

Let me begin by saying that I was a fan of yours before all these other ass clowns were (especially that Ryan Reynolds chump). I was with you at Ghost World, when you were still a nobody, relatively speaking. I figured we shared something special because we were the same age ... we both lived in New York (or, at least, I would be living there shortly) ... we both appreciate Steve Buscemi and dark indie comedies. I mean, it worked well on paper. 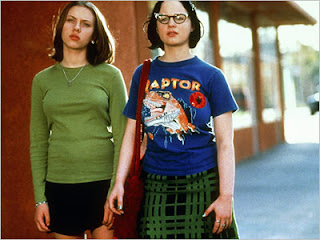 (Scarlett rocked my ghost world as early as 2001.)


And then I saw you at that Louis Vuitton event on 5th below the park. I was photographing that night. You may remember. I had longer hair then. I was wearing that blue vertical-striped shirt, the blue and white one with the -- anyway ... it's not important ...

... I really came here today (and by here, I mean Starbucks, to utilize their free AT&T provided internet and post this letter disguised as a blog entry) to tell you what a fantastic job you did in Iron Man 2 (I caught this afternoon's showing at the E-Walk in Times Square) and to apologize.

Typical of men, I spent the walk home from the cinema concocting an elaborate fantasy in a parallel universe in which you played a leading role. Well, to be honest, the "elaborate" part is not really typical of all men. That's more typical of me. Most men, I imagine (or so I've heard) keep their fantasies relatively simple, but I feel that this more rushed, passion-free method of fantasizing is a disservice to you. You're an actress -- I'm sure you understand. The elaborate fantasies give you more room to explore, to be free. Better storylines. Justifiable motives. You deserve that kind of pre-production. Anyway ... not the point ...

... The point is that, in this fantasy (in which you were clearly involved), right around when I ran into you for the second time at the fruit stand next to the Museum of Natural History, and you asked me how the dinosaur exhibit was, and I said (very suavely, very Bond), I said, "Hm. Decent," right around then -- I turned down your advances. I told you I was engaged. Which I am. I don't think I ever concealed that. But I never brought it up either. But today I did.

Clearly it means that you have to stop coming over. It's just inappropriate and the hours are all screwy. I mean -- if you want to play chess or something, that's different, you know. If you want to show me some of those moves from the movie -- that one where you seemingly wrapped your legs around that guys head several times, instantaneously killing him -- well, maybe we shouldn't do that one. But chess. Or cheese. And crackers. Sure. We'll hang, you know.

Anyway, thanks for everything. It's been swell.