We coined the first round of eliminations the IMDB Round -- because if you don't have your filmography on IMDB with at least 10 directorial or camera credits, then you shall not be considered. You will be eliminated. Simple as that. And 2E's better have heard of at least one of them.

(There's only one round at this point.)

We're really only now jumping into this conversation. Videography wasn't something we were originally planning on. For some reason -- probably because our lives are centered around photography -- we didn't really view it as a necessity. We know we're going to have some amazing images from our amazing photojournalist, Noah Devereaux. Won't that be sufficient? Do we need video, too?

When I reminded her of these important details during our most recent wedding phone date, 2E's explained what had happened. We'd actually never spoken about it. Instead, I had formed the above opinions on my own and then substituted the word "I" for "we" and passed it off as true. This is what actually happened. 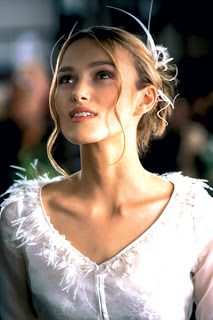 And so our hunt for the best videographer at the cheapest price begins. For years, 2E's has viewed the Keira Knightley-centered, quick-cut, extreme close-up compilation in Love Actually as the epitome of all wedding videos -- so we need to find someone who can do that for much less than its worth.

The trouble is that she's already begun to gush. She's found some gush-worthy reels and sample videos from videographers who are out of our price range ... which doesn't mean (so I've learned) that we'll be choosing a cheaper videographer. No, it means that we'll be (a) cutting corners elsewhere or (b) upping our budget.

Here's 2E's shortlist as of this morning: