8th Wonder of the World

It was one of those times as a groom -- strike that, as a man -- when you knew instinctively that this had nothing to do with you. That nothing about today made it your day.

(And I imagine, in many ways, it was good practice for October 2nd.)

And the jeweler knew it, too. He set the black velvet ring box on the glass display case while 2E's was still recovering from the sight of her own band, sliding it toward me with an air of, Oh, and here's yours buddy. He'd been in the business long enough to know how this goes. 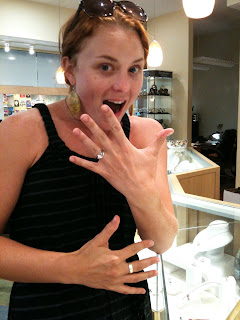 2E's band had been customized to fit the curve of her cocktail engagement ring, and she marveled at the precision of the arch. The Great Pyramid of Giza was constructed over a 20-year-period with the blood, sweat and tears of hundreds of thousands of Egyptians, but this had taken four days and the hands of one jewelsmith and goddamnit it was just as impressive.

We met the man behind the bend in the ring. He was a nameless man, dark-haired, 5'8" perhaps, with a gap in his teeth and a glowing aura about him. This man had inspired the tears of millions of brides and brides-to-be. This man could break hearts. Despite the whole missing teeth and broken English thing.

My band, on the other hand, came directly from the purchase catalog -- a simple, 14-carat white gold twist-on, thicker and heavier and shinier than I'd expected but, otherwise, a perfect replica of the one I'd seen in-store the week prior. It suited me perfectly, me being someone who's idea of everyday jewelry is a LiveStrong band. 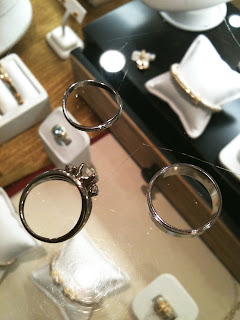 (clockwise from left) 2E's three-prong engagement ring, the 8th Wonder of the Wold, and mine
The band will certainly take some getting used to. I spent a good ten minutes in the store, striking quotidian poses (the "lean against a counter" pose, the "boy my nails are long" pose, etc.) and never felt entirely comfortable. But the shine will fade, they say, and the gold will yellow, and after October 2nd, my band will as mean as much to me as it does to her.

Hell, I bet that damn pyramid took some getting used to, too.
Posted by Brian

Email ThisBlogThis!Share to TwitterShare to FacebookShare to Pinterest
Labels: Engagement Ring, The Groom Says, Wedding Bands, Wonders of the World