Hours before 2E's departed for her Bachelorette Weekend, her MOH sent her a text, requesting -- in addition to the sunscreen & Bowie knife -- that 2E's bring along a photo of her groom. A photo of me. And not just any a photo of me. Oh no.

"Please note, it should be a photo that you don't mind getting besmirched."

Merriam-Webster definition: to be smirched.

To be honest, I don't know what to make of it. What could it be used for? I race through the possibilities:
After a night on the couch -- tossing and turning at the thought of the girls, up there in their beach-side hotel, with all of their conjuring and voodoo and room service -- I've decided to spend the remainder of the weekend catching up on old movies, a good distraction from all of the smirching taking place two hours northward. I picked up the following films at the local Blockbuster this morning:

The Craft
Three socially outcast high school girls dabble in occult practices, and when they notice that the new girl has the powers of a natural witch, they talk her into joining their coven.

Girl, Interrupted
A depressed and directionless high schooler befriends the band of troubled women in her ward at a mental institution.

The Sisterhood of the Traveling Pants
Four best friends spend their first summer apart from one another and share a magical pair of jeans, which inevitably gets besmirched with all of the adventures and traveling and passing around of the pants.

Very Bad Things
A prostitute is killed during a Las Vegas bachelor party and hilarity ensues. 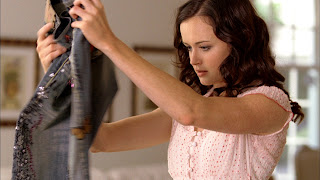 "OMG, Bridget totally besmirched the crotch on our pants."
Posted by Brian