Six years ago you were terrified to meet him. Last year you hopped on a plane, hopped into a rental car, drove to his Chapel Hill home and woke him from his sacred midday nap to ask him for his daughter's hand in marriage. And in less than two months, he'll be escorting your 2E's down the aisle, jotting down the bullet-points of your vows on the palm of his hand and ensuring that you uphold those promises for, like, forever.

But at this moment in time, Reid Wilson -- FOB and father-in-law to-be -- has stopped in with a semi-fresh pot of coffee and a bowl of peanuts to answer some groom-related questions and to help ease our nerves. So to speak.

SO WHAT'S IT LIKE TO HAVE STEVE MARTIN PLAY YOU IN A MOVIE? DO YOU FEEL LIKE YOU HAVE TO FILL HIS BIG, SARCASTIC SHOES??
Isn't it the other way around? If Steve Martin is playing me, doesn't he have to fill my big sarcastic shoes? And speaking of Steve Martin, shouldn't you and your 2E's be working on your vows about now...? Only 58 days left.

GOOD POINT - ANY SUGGESTIONS IN THE VOW DEPARTMENT? ANYTHING I SHOULDN'T PROMISE??
As I recall, my wives and I worked on our vows separately and then compared notes later. That's about all I remember now.

I'm not one for giving advice, but I think there is some expectation here since I've read the BM and the FOG and the MOO interviews...

YOU MEAN THE MOH INTERVIEW.
Right. So. OK...

(a) Absolutely memorize your vows, and don't bring the script up there as back-up in case you "get nervous and black out." Man up!
(b) When my brother Phill turns to you and signals, ask in a quiet but audible voice, My turn? When he nods, shrug your shoulders innocently and begin. This will get everyone's attention. You know how they tend to drift of during those monotonous parts.
(c) At some point during your vows, create a pregnant pause and appear to get somewhat choked up. (I saw you do it in that college production of Macbeth, so I know you have it in you.) Helps get the audience on your side. 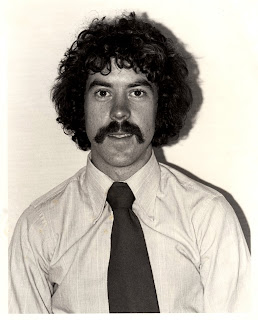 (d) Don't use rhymes. Not even iambic pentameter.
(e) Don't promise anything that you can't actually pull off. And while poetry itself is out of the question, you can certainly take poetic license in service of sentimentality. Remind 2E's that you love her deeply and that you will always keep her best interests in mind throughout your lives. That's what's important. Say the stuff that makes them go, "Ah."
(f) But drop the "obey" stuff. It's not expected, and it sounds pedestrian.

AND YOU SAID YOU DIDN'T GIVE ADVICE ... DO YOU STILL HAVE YOUR VOWS IN SAFEKEEPING SOMEWHERE? MAYBE I CAN STEAL SOME OF YOUR ZINGERS?
Oh, yes. And no, absolutely not.

COME OCTOBER, YOU'LL BE WALKING DOWN THE AISLE FOR THE FIRST TIME. HAVE YOU BEEN PRACTICING YOUR GAIT?
Oh, nuts! I forgot to worry about that minor detail ... I've been so wrapped up in the bathroom floral arrangements. Now I have a little pain in my tummy.

HIGH EXPECTATIONS FOR PHILL AS OUR NON-DENOMINATIONAL OFFICIANT?
I have the utmost confidence in Phill, and you should, too. Every time he's had master-of-ceremonies-type responsibility, he never fails to pull off some masterful prank. He's a hoot! Like three years ago, at Uncle Ralph's funeral, he -- oh, well, I don't want to spoil the surprise. 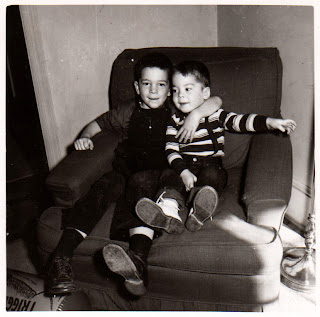 Reid (right) and 2E's Uncle Phill, hamming it up circa 1955
HMM. MAYBE WE SHOULD HAVE YOU STANDING-BY AS A BACK-UP...
Actually, I did play the role of the priest at our parents' 50th wedding anniversary, set in the basement of the Catholic Church in Boston. But the collar I'd fashioned was way too stiff, and I moved around like I was in a body cast. And I was far too serious during the homily -- it seemed right when I was writing it, but people like to be entertained. You won't have that problem with Phill. He's a riot.

FROM WHAT YOU'VE READ OF THE BLOG, HOW HAS WEDDING PLANNING CHANGED IN THE LAST 10/20 YEARS?
As I experience secondhand your involvement in the process, I am filled with severe regret. If only I had known that I could have taken a 5-hour event and stretched it out to a joyous year's-worth of "honey do" lists... 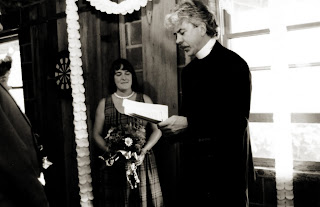 
OKAY -- BEACHY, WOODSY OR URBAN HONEYMOON?
I'm missing the point of this question, Madman. I mean, you've already made your decision. This sounds like a fluff question. Like you're just trying to fill space.

PROBABLY. YES. GETAWAY VEHICLE AT YOUR WEDDING?
Actually, I didn't get away. I went through with both weddings in their entirety. And I have absolutely no regrets.

FAIR ENOUGH. BUT IF YOU WERE TO PLAN YOUR ESCAPE...
...oh, hypothetically speaking, if I were to need a getaway vehicle, I'd pick a stationary bike.