Underwater Engagement Photos + Save the Date

or what I affectionately refer to as

But my favorite thing about this post has to be the following photo... 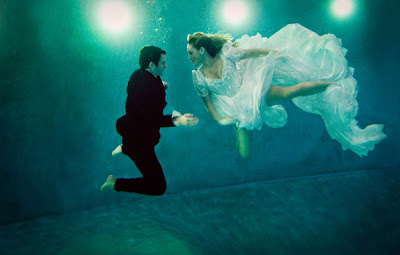 ...the photo that convinces me that she (Stacey) is in fact a mermaid -- or perhaps was a mermaid -- and that he (Jeff) is in fact not. While she (Stacey) has struck a balletic pose, leg extended, gown flowing regally behind her -- like something you'd rightly see on the ceiling of the Sistine Chapel -- he (Jeff) is clearly thinking, WTF?! WHY are we doing this again? Christ, I'm probably making that stupid underwater face I always make. Oh - perfect - now I'm out of breath.

Having said that ... he (Jeff) is obviously a noteworthy groom for diving in and going along with his former mermaid bride's aquatic photo request. Go you (Jeff).

I'm hoping Jeff and Stacey's series inspires similar exotic Save the Date shoots. I imagine a shark diving bride convincing her bank telling groom to shoot their pics in 4' x 4' steel cage off the coast of South Africa ... the bride appearing elegant and calm while her groom goes berserk as the Great Whites snap at the couple and take hefty chunks out of her train.

Or, above sea level, I imagine a snake charming groom who (somehow) convinces his 3rd grade teaching bride to shoot their series in side-by-side tanks piled high with garters, ribbons, kingsnakes and the occasional boa ... the groom smiling as the creatures slither in and out of his shirtsleeves while the bride cries uncontrollably.

So here's to the ballsy groom with the mermaid bride -- may your ballsyness reach far and wide.

All photos by Kelty at Steep Street Photography
Posted by Brian