Long ago I wrote a post on this here blog in which I (in effect) shat upon the title of Co-Maid of Honor and the trend of having two people perform the duties of one person. I won't quote myself, because then I'll truly feel like tool, but I may have said something along the lines of:

"Men would never let this sort of thing happen."

A few months ago, my best friend (and former Best Man) Justin approached me about his own wedding ... about serving as Best Man at his wedding ... and about doing so alongside our mutual friend Odin. It was like the birth of a sitcom premise. One wedding, one groom, one role -- two men. CO-BEST MEN.

(I hear that Two and a Half Men time slot is wide open right now.) 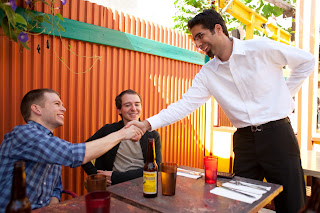 Justin (center), Odin and I at my pre-wedding brunch
I love Odin like a brother, I truly do. He was there throughout my own planning process and during our wedding weekend, assisting however he could and bringing humor and a fresh perspective to those tough and tense moments. And while the thought of co-piloting rather than spearheading this project solo still makes me question my manhood, two things stick out in my mind: (1) if I had to co-pilot this with anyone, it would be Odin, hands down; and (2) it's a huge sigh of relief.

It's nice to have another dude to brainstorm with, to bounce ideas around with, to coordinate with. We're each other's checks and balances. We're like the two houses of Congress, only efficient. And being that we're both in the entertainment industry, we have some trailblazers to look up to. 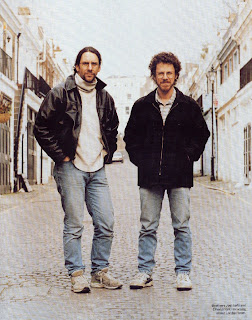 Like me and Odin, Ethan and Joel Coen are a writer and director, respectively, and their partnership has created more works of genius than I care to name. 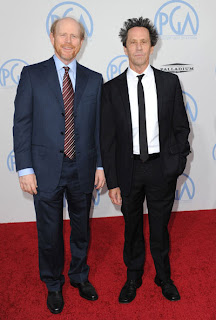 Ron Howard & Brian Grazer: if this platonic, Hollywood power couple can come together to put out Apollo 13 and Cinderella Man and Randsom and Frost/Nixon and Backdraft -- then I think Odin and I can throw a killer bachelor party. And we'll just hope it doesn't turn out like The Dilemma. 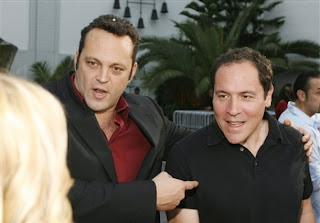 Speaking of which ... there's no better idols for two Co-Best Men than Favreau and Vaughn. From Swingers to The Break-up to the Iron Man franchise, these guys know the value of putting yourself aside and showing some man love.
For now, Odin and I have bonded over the joy in providing Justin with skewed details of our stag weekend (happening at the end of this month). At first we thought that visiting all the bridges from The Bridges of Madison County would be lame, but the idea is really growing on us.
Posted by Brian