Mobbed is a new series on FOX that premiered after last week's Idol. Howie Mandel hosts the program, which exploits celebrates the more-popular-than-ever flash mob phenomenon and uses it to deliver private messages -- messages like Will you marry me?

No surprise that Howie's first episode centered around a groom; large-scale proposals (esp. those involving singing and dancing) never fail to rake in huge viewer numbers on YouTube. And I could sit here and bash the newest addition to our reality-based scheduled programming, but it would be far too easy. Instead, I'm going to take the road less traveled; I'm going to find the good in the intolerable.

[FYI - major spoilers here, so if you're genuinely concerned about that sort of thing, I would suggest watching the episode first.]

My primary issue with the planning of the flash mob proposal and subsequent wedding (yes, the couple got married moments after he popped the question at the Americana at Brand in Glendale) was that the creators/planners/organizers didn't take the personalities of the couple into consideration. Howie's plan involved an elaborate hoax, some occasional singing and acrobatics, and a crowd of hundreds breaking into spontaneous dance sets. But does that over-the-top proposal fit every couple?

Think back to that popular Madison Square Park proposal (like I said: two million plus viewers). Woodrow, the groom who orchestrated that impressive number, is clearly a performer by nature. I watch that video, and without hesitation, I believe that that proposal was precisely what he wanted and that he coordinated the performance, the t-shirts, the signs, the whole bit. It's an extension of his personality and, hopefully, of their relationship.

Justin, the groom on Mobbed, is no Woodrow. He's uncomfortable with his body, generally low-key, and in no way a song-and-dance man (though he does he mean "dice throw"). Howie dreams up this elaborate event that occurs over the course of an hour, involves over a thousand people and spans an entire outdoor mall ... but Justin seems uncomfortable. In his audition tape, he confessed that things had been rocky in their relationship, and he wanted to show that he was 100% committed to Nikki. In this groom's humble opinion, the best way to do that is to plan and deliver a heartfelt proposal that reflects you as a couple. This proposal, despite the bells and whistles, was entirely Howie's creation. Unless the editor was given specific direction to cut Justin out of the planning process as much as possible -- it's clear that the groom played a less than pivotal role in shaping this event. He may have popped the question, but the environment in which it happened (the Disney Main Street pandemonium, the Broadway-style performances, the three-ring circus) was the work of another man.

So why doesn't this critique matter? Well, (a) I'm not their demographic, at least not in this episode. I like a good flash mob as much as the next guy, but I suppose I'm more drawn to the darker, more subversive side of that world -- more like the happenings orchestrated by the creative minds at Improv Everywhere.

Moreover, (b) the bride loved it. She was in tears for more consecutive minutes than any person in the history of televised proposals. 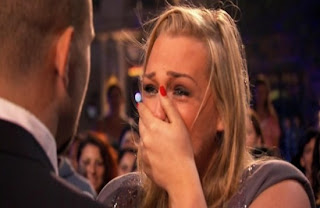 When I turned to my 2Es, sitting on the sofa beside me, I knew that the proposal (flaws and all) was successful. She was a mess. Typically unimpressed by pageantry, she was swept up in the emotion of the moment and sincerely touched by Nikki's reaction. And after reading fellow bloggers' responses this weekend, I see that she wasn't the only one who found the proposal touching and somewhat magical, though many were less than pleased with Howie's idea to turn the flash mob proposal into a flash mob wedding.

So ignore all that stuff I said at the beginning and watch the episode because 2Es (and millions of women across the U.S.) found the sentiment in the spectacle. And just don't think about the couple's drive home that evening, when a glowing, newly-married Nikki asks Justin, How the hell did you plan all of that?, and he has to give all the credit to that guy from Bobby's World.
Posted by Brian