IM Seeking IF: An Interview with the Stars of "When Harry Tries to Marry"

The average American male is typically depicted as one who avoids marriage until the last possible second, content in the cold comfort of his uncomplicated life, until he meets the one girl who challenges his "man is an island" complex and truly sweeps him off his feet. Extended bachelorhood is a pretty common characteristic in Hollywood's leading men (see: George Clooney in any movie). 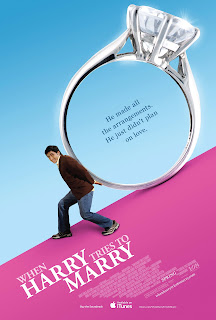 So I suppose it's pretty jarring when Harry, the title character in the new film When Harry Tries to Marry, calls up his estranged uncle very early in the film and asks him to find him a suitable bride. Harry's a young, Indian undergraduate student living in New York City; but rather than spending his college years exploring the dating scene, Harry (played by Rahul Rai) wants nothing more than an arranged marriage with an Indian girl whom he's never met. For American men -- this might be a tough plot point to swallow. Thankfully, Director and Co-Writer Nayan Padrai introduces your average American girl (Harry's classmate, Theresa, played by Stefanie Estes) to challenge Harry's unusual behavior and show him the joys of simply "getting to know someone."

With their New York and Los Angeles premieres fast approaching, I've asked the two stars of WHTTM to sit down with me to get their perspective on American vs. Indian weddings as well as some tips on how to get colored powder out of hard to reach places.
--
TGS: Stefanie -- coming from a guy who blogs entirely about weddings, are women intimidated by guys like Harry who need to settle down?
SE: It depends. I think a willingness to settle down can be very endearing and refreshing given that's what you're looking for in a partner and a relationship. On the other hand, if you've been on two dates with a guy, and they start talking about what kind of flatware you are going to register for or what you will name your first born child...

SE: Yeah, that's kind of creepy.
TGS: Is Harry totally out of touch when it comes to modern romance?
RR: I actually don't think he's out of touch at all; if he finds the right girl, he'll romance the hell out of her. In terms of his austere approach to the bachelor life ... I can understand that approach. He has no care to "taste the different types of wine," like his dad wants him to. He just knows what he wants in a woman. 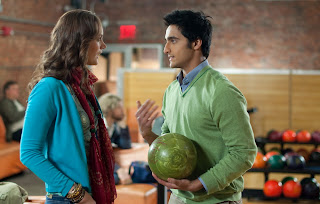 Stefanie Estes as Theresa & Rahul Rai as Harry, skating through that ever-awkward "this isn't a date" conversation.
TGS: Is there anyone in your circle who you would trust to arrange your own marriages?
SE: Oh man, that's hard. I would feel really uncomfortable having someone else arrange something as important and intimate as marriage.


RR: To me, finding that person is a necessary journey to take. I'd rather make the decision myself. I guess I'm a little selfish in that respect. Since I have to commit the rest of my life to one woman, I might as well choose who she is, right?
SE: I suppose if I had to, I'd have one of my best friends do it ... preferably a best friend who has also lived with me and understands my hidden quirks. Then they could find someone who's not only a match in terms of personality and temperament but who's also okay with the fact that (sometimes) I dip carrots in ketchup and that I will spend an entire evening on the couch watching infomercial bloopers on YouTube.
TGS: Theresa refers to Harry's arranged marriage as the "Ultimate Blind Date." On that note -- tell us about your worst blind date.
SE: I've actually never had a blind date, and now that I think about it, I wonder if it's even possible anymore with how much you can find out about someone online. Facebook and Google seem to provide the means for any pre-date stalking you might need.


RR: I'm not big on the dating scene, so I've never been on a blind date either ... and I hope never to be on one. I'd rather let things like love and relationships happen naturally.
SE: Though I have been on dates where I didn't know it was a date. I went to a fancy benefit with a friend of one of my old bosses. I really thought I was just doing him a favor, but by the end of the night, he was talking about bidding on the romantic getaway package offered at the silent auction. I realized that we were not on the same page. It didn't help that he was old enough to be my father (gross!), but I did get a pretty superb free dinner and gift bag out of it!
TGS: Stefanie -- rumor has it you're a bridesmaid in a friend's upcoming wedding. I'm gonna assume that a movie wedding is a little easier to coordinate than an actual wedding.
SE: Well, I will say that filming a movie takes a lot of energy. We shot the pre-wedding celebration (or Sangeet) scenes over the course of two nights. It was exhilarating to be on location with tons of singers and dancers and wearing a stunning costume ... but at 4am that exhilaration starts to wane. I think a bunch of us actors took an herbal supplement that was supposed to give us the same energy as five Red Bulls or something.
TGS: Wow, we'd love to get our hands on some of that. While we're on the topic -- who's better dressed: American grooms or Indian grooms?
RR: Indian grooms are better dressed, no offense. Just more thought into the whole clothing deal with Indian weddings. We are much more colorful and glamorous grooms. We probably wear twenty pounds worth of jewelry and clothing, and women probably wear their weight in the same. It's sounds crazy, but when you see the wedding pics, it totally pays off. There's a hefty price for glamour and beauty. 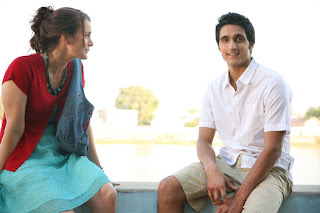 SE: I'd also like to see American brides adopt some of the colors from Indian weddings; they're so vibrant and really lend themselves to the spirit of celebration. Vera Wang has nothing on some of the saris and lehnga cholis worn at Indian weddings!

TGS: True, but Vera does have some sweet mattresses. Any other customs of ours that pale in comparison?

SE: Well, the Sangeet ceremony certainly makes the western rehearsal dinner look pretty stuffy and lame. It's a huge celebration that happens before the wedding. I think a lot of couples get stressed out about the wedding, and it can become tense. The Sangeet ceremony seems like a great way for everyone involved to relax, enjoy themselves and remember what a great occasion it is.
TGS: We only caught a glimpse of Harry's bachelor party. What kind of atrocities took place when the cameras cut away? We have a feeling your roommate Louis got arrested...
RR: What happens at the bachelor party stays at the bachelor party. I'm under a special code to not disclose any such information.

TGS: Hey, we're all about the man code, but that guy certainly has some odd habits. What's up with the intense man-scaping?!

RR: Hey, whatever floats your boat (and your woman's boat). I guess it's a polite thing to do for your partner.

TGS: The holi scene (in which Harry and Theresa toss and smear colored powder on each other) is clearly one of the most memorable moments in the film. Are you guys still finding powder in unexpected places?
SE: No, thank god. I am not kidding when I say that I spent hours in the shower getting that powder off. Don't get me wrong -- doing Holi and shooting that scene was amazing. Just be forewarned: the powder likes to stick around long after the party is over.
TGS: In the film, all of the characters seem to follow their own rules on relationships. What does your own rulebook say?

SE: I've never been able to follow a set of rules when it comes to the dating game. You know, like "wait two days before texting after the first date," and stuff like that. I've always done what I want in the situation. And honestly, as I think about, doing what you want is the really the best rule you can have. I feel like the times when you are true in your relationships are when they are able to blossom and grow. I guess my rule for relationships would be to throw out the "rulebook" and be true and honest to yourself and to the other person.

RR: Falling in love is a natural part of life, so why run away from it? Embrace it. It will never happen at a certain age (like 28 -- which is apparently the "right" age to get married), and it will never happen at an opportune time. It'll just happen naturally. There may be a million and one excuses to run away, but it's a risk we should all take.
- - -
"When Harry Tries to Marry" opens on April 22 in New York City and on May 6 in Los Angeles. Visit the film's website to watch the trailer, check out special web features and purchase tickets. You can also become a fan on Facebook and follow the film on Twitter at @whenharry.
Posted by Brian