Pop and (Pad)Lock: How Americans Can Go Bigger with Romance

It's true, there is something inherently European about etching your initials into a padlock, affixing it to a railing on a bridge, and tossing the key into the murky and slightly pungent current of the canal below. These acts of padlock love, in which lovers proclaim and seal their commitment to one another (oftentimes to mark their engagement), are slowly making their way into the states; but we can't begin to compete with our neighbors across the Atlantic, whose railings and fences and benches and whatnots are literally shrouded with locks.

And it's no surprise that the love shackles that now appear on the Brooklyn Bridge, for instance, are clipped on occasion -- hacked off the railings like cheap, drugstore padlocks left on gym lockers overnight -- removed by the goons at the Department of Transportation, who ignore the sheer romanticism behind these acts of vandalism and adhere to the rules of the historic structure. 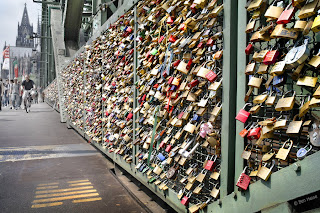 Geez, this is more un-American than universal health care.


Of course, we can't blame the DOT for putting a stop to an emerging trend; the fact is, love padlocks haven't caught on simply because they're not American enough. This is an indication that we need something even more permanent, more impressive, more patriotic. We're the United ******* States. We don't indulge in simple, unadorned, old-fashioned romanticism; no, we build a ******* Subway chain restaurant.

alternatives to padlocks for americans who need more
1. Open a Subway. If permanence and security are what you're after, why not go for the gold and join the largest fast food franchise on the globe. At the close of 2010, Subway actually surpassed reigning champion McDonald's as the world's most proficient feeder of hungry people. Nothing says I am committed to you forever like making your 2Es a Subway franchisee and making her financially accountable for the success or failure of a restaurant built on the novelty of fresh-made sandwiches. Total cost: upwards of $78,000.
2. Reconsider your padlock placement. Perhaps you and your better half don't have $15,000 in start-up costs. That's fine. If you're going to join in the padlock pandemonium, why not think more carefully about where you chain your bike. Ditch the Empire State Building and the Golden Gate Bridge and consider some areas where it's highly unlikely that department officials will intrude -- like a serial killer's basement ... or a community library ... or a school in a low-income neighborhood. You could litter that playground with padlocks and (I guarantee you) return decades later to find those locks untouched. Total cost: $3.99 plus tax. 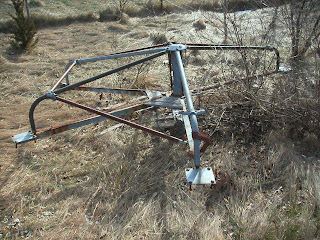 This busted merry-go-round is a padlock gold mine.
3. Osama Bin Laden's hide-out.

4. The Winter Garden Theater. True romance doesn't come in the form of a steel ring clasped around a germ-infested handrail overlooking the Seine. Hell no. True romance is premium orchestra musical theater tickets. Show your honey how long you're planning to stick around and purchase two tickets for 2086 -- an early 75th Anniversary gift. And if there's any Broadway show with as much (inexplicable) staying power as your marriage, it's the (inexplicable) smash hit, Mamma Mia. Seating is apparently limited. Total cost: $423.60, plus 75 years worth of inflation.
Posted by Brian