And this is why you don't take photographs on bachelor parties 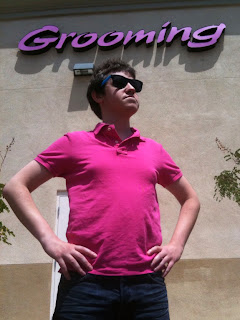 Groom's groomsmen and closest friends hosted a bachelor party for Groom in Vegas last weekend. While seeing the sights off the strip, Groom and his caravan encountered this sign on the side of a retail building. Groom posed. The photo was taken. And in a moment of weakness and weak-mindedness, Groom said, "Oh, you should send that to [future wife]. She'll think it's hilarious."

[Future wife] received the photo later that afternoon. She did think it was hilarious. "That's hilarious," she said to herself.

Then she opened her web browser. She accessed Googlemaps. She typed in, grooming near Las Vegas, NV. 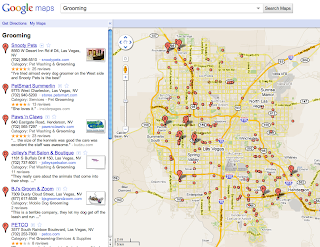 No, this was not a proud moment for [future wife], but it wasn't by choice. Something greater was dictating her actions.

She went through each search result, from Snooty Pets to Groomingdales to Pawsh Wash Pet Grooming on Warm Springs Rd. When the Googlemaps street view failed her, she resorted to calling each place of business and inquiring about the bright purple sign on the side of their building. When they denied having said signage, she hung up.

She finally tracked Groom down at an unlisted boarding house off Tropicana Avenue. She tracked down all of the gentleman's clubs within walking distance. She called each one, introducing herself as a nearby strip club owner (she employed the pseudonym Phoenix, claiming to be the "big cheese over at Lady Parts"), alerting them that a pervert in pink was "busting into" clubs in the area and getting really "touchy-touchy."

Groom was arrested 45 minutes later by the Clark County Sheriff's Department. He was trying on sunglasses at a nearby convenience store at the time of his arrest. His hearing is scheduled for Friday of next week.

This is why you don't take photographs on bachelor parties.


- - -
Of the above information, only the sunglasses portion may be true.
Posted by Brian