Verdict on Bridesmaids? The Groom Says: See It.

Chris from The Man Registry sent me on a mission last night; and no, it wasn't to fetch him more booze so he can wrap up the final chapters on his groom guide book.

Acting as TMR's film correspondent, I attended a special screening of Bridesmaids last night. Bridesmaids. Not to be confused with Groomsmen: the hilarious comedy that doesn't actually exist but plays constantly in my mind, starring Jason Bateman, Will Arnett, Jonah Hill, James Franco, Paul Rudd and an obese Brad Pitt. 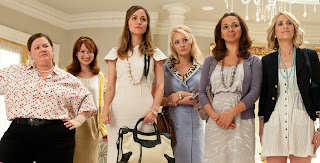 Get the Groom's official take on Bridemaids on The Man Registry blog:

"Bridesmaids": Why Hangover II Should Be Worried
Posted by Brian