I had the following image taped to the back side of our front door for the duration of our wedding engagement: 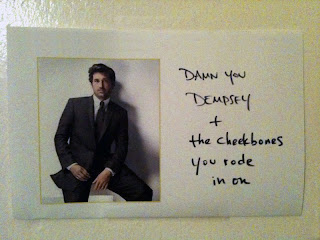 Dempsey
It was meant to be a source of inspiration, meant to push me to shed some pounds, get trim and toned for the wedding, and grow increasingly handsome. It never worked.


Three months after the wedding, I began a training program with Damon Valley, the exercise, nutrition and motivation coach behind La Vie Physical Fitness. Damon kicks our asses every Monday, Wednesday and Friday at Pan Pacific Park here in Central LA, and after three weeks of consistent ass-kicking, I am already in the best shape of my life. Last week we compared a recent photo of myself with a photo taken on our honeymoon; the men in the photos are completely different people. And it's a bittersweet feeling ... because I know that I could have made the change before the wedding had I developed a real course of action.
Instead, I chose to tape a photo of Patrick Dempsey to the front door.

Seeing and experiencing these positive results, I can't in good conscience keep Damon to myself any longer. Grooms (and brides) -- if you're at all interested in altering your body for the big day, in whatever way that may be, the first logical step would be to read Damon's suggestions below on how to get started, how to approach training and (the most difficult part) how to keep it up. And if you're not doing anything tomorrow morning, I'd suggest too that you join us at the park and officially get your ass kicked.
---

SO DAMON -- WHAT CELEBRITY MIGHT YOU PIN TO THE WALL FOR INSPIRATION?
Without a doubt, it would be Jason Statham. He not only has a great physique, but an athleticism and work ethic that every man could benefit from. So many guys hit the gym focused strictly on aesthetics, following exercise plans from muscle magazines. Normal guys over-train in no time. And the worst part about those programs is that they are not functionally beneficial. They're designed for genetically and chemically gifted people

YEAH, I'M NEITHER OF THOSE THINGS.

But with Jason, you can see he is balanced. He doesn’t just look muscular, but he is strong, flexible and possesses a high level of conditioning. He busts his ass, and the results show. I find that inspirational. 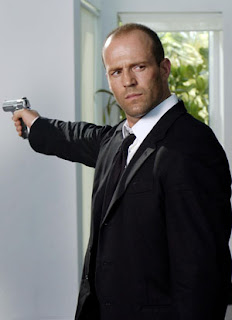 He's actually holding a dumbbell in his left hand
GROOMS HAVE, ON AVERAGE, A YEAR OF WEDDING PLANNING TO LOOK FORWARD TO. FOR THOSE GUYS (AND GALS) WHO WANT TO SLIM DOWN AND TONE UP FOR THE BIG DAY, WHAT ARE THREE SIMPLE STEPS TO GET THE BALL ROLLING?
Step One: Develop a Plan of Attack. Achieving any goal, fitness or otherwise, always begins the same way: you must take one step. That first step is very powerful; it sets the pace for those that follow. So make that first step really count. Be prepared. Plan things out.

Define your goals as specifically as possible to establish a game plan. Set some basic smaller goals that, when achieved, take you closer to your primary goal. Then set a simple weekly schedule, allowing time for training as well as sleep. The last thing you want to do is commit to a six-day, double split training program when you can barely find the time or energy to train for just three days. So keep it simple and be consistent.

I SEE THAT YOU CRAMMED A FEW MINI-STEPS INTO STEP ONE.
Step Two: Fruits and Veggies. You cannot train on a bad diet, period! So cut out the refined carbohydrates and sugars in your diet and replace them with whole fruits and veggies. These foods are nutrient-dense and low in calories. Eliminate processed foods as well; they're loaded with unhealthy preservatives and empty calories that make you fat. If you need to cheat (which I do discourage), make it only one day per week, preferably for one meal. Make it the same day each week so that you establish discipline throughout the remaining days. You've all heard that diet is 80% of the equation, and is it so true.

YES, AND THE OTHER 20% IS OUR JASON STATHAM SHRINE.
Step Three: Train with Purpose. Don't think for a second that you can lift a weight here or there, or spend hours on a treadmill, and that you'll instantly transform your body. I see so many people just spinning their wheels in the gym, training with a low intensity. They are wasting their time, and they'll never see results. You have to really work hard for it.

One of the best things you can do is set performance training goals and commit to them. Aim to improve each workout, either by lifting more weight or doing more reps, and you'll get the most out of your training. 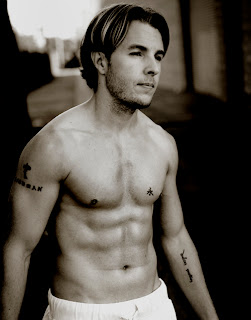 CAN GROOMS REALLY EXPECT "HUGE" RESULTS IN A YEAR?
Absolutely. A year is plenty of time, but it won’t happen overnight. There needs to be long-term commitment, discipline in training and a proper diet. And there needs to be consistency, day in and day out. That's what it takes to make a serious transformation.

FITNESS-FRIENDLY BEER OR COCKTAIL:
Alcohol consumption slows your metabolism, which is no good for fat-burning ... but if you do go out and drink, I recommend straight vodka. Definitely steer clear of the fruity drinks; they are often loaded with sugar.

GIVE US A BRIEF EXERCISE ROUTINE THAT A GROOM CAN DO ON THE MORNING OF HIS WEDDING TO PHYSICALLY (AND MENTALLY) PREPARE FOR THE GAUNTLET:
You can’t go wrong with a body weight circuit routine. Do the following exercises, 10 reps of each, with no rest between them. Do 5 to 10 circuits, depending on your ability. This works the entire body and requires no equipment. 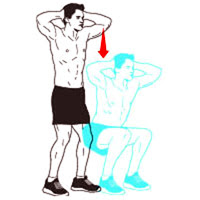 a. Jumping jacks
b. Prisoner squats (right)
c. Burpees with push-ups
d. Reverse lunges
NICE. AND TO GO WITH THAT ROUTINE ... THE ULTIMATE GROOM WORKOUT PLAYLIST?
Well, I'm a Rock fan, so my mix would include some Disturbed, Papa Roach, Linkin Park, Slipknot and the like. I think it's important to get motivated when training, so any music that gets you in the mood is perfect. And when you are really feeling pumped, you perform better as well.

OK, SITUATION TIME: A RATHER FEEBLE GROOM CAN BARELY CARRY HIS LAUNDRY BAG ACROSS THE HALL ... LET ALONE CARRY HIS BRIDE ACROSS THE THRESHOLD. WHAT DO YOU DO? (A) PUT HIM ON AN INTENSIVE STRENGTH TRAINING PROGRAM, (B) TEACH HIM A FIREMAN'S CARRY AND HOPE FOR THE BEST, OR (C) BUY HIM A WHEELBARROW AND SUGGEST THAT HE PUSH HER OVER THE THRESHOLD?
I don’t know, C sounds pretty good! Let's hope the wheelbarrow isn't needed...

No, the answer is (A). I would definitely include some power moves, exercises that build overall strength throughout the entire body, so dead-lifts and squats are a must! Pull-ups and other pulling movements would also be included to improve upper body strength. I love pull-ups because they require you to lift your entire body weight! If you can do that, you can certainly carry your bride over the threshold. Unless she's an adult gorilla. That's another issue entirely.