Giveaway Reminder + a word from Best Man Justin in France


Our The Art of Shaving contest is open until NOON! The winner will be announced around 1PM this afternoon. Just leave a comment describing your (or your groom's, or your hubby's) most hilarious/horrendous shaving experience. Five readers will receive a complimentary Royal Shave -- a $55 value -- at The Art of Shaving!

(See the complete collection of photos on the Joanna Wilson Photography blog.)

If inspiration is what you're lacking, you're in luck! Former Best Man Justin has agreed to share a calamitous shaving tale of his own. You've been warned:


- - -
Those of us who claim to have "grown-up" on film sets learned to pick up the secret film terminology along the way. One of the earliest terms I remember learning is continuity, and I have the scars to prove it.

Contrary to my own quasi-logical dissection of the word (CON-tinuous NUITY-newness), the term actually refers to "continuous unity" -- the continual matching of location, script, wardrobe, weight, and facial hair. Sometimes a film will span the day-in-the-life of a character (a la Training Day, Collateral, Die Hard) but is typically shot over several days, weeks or months.

Another thing about movies that pertains to shaving is where you film them. Film shoots can sometimes take place in the most remote locations with extremely limited resources. I was on one such West Coast shoot when I was nineteen. My peach fuzz was growing quickly enough that I had to shave every day but slowly enough that I was in total agony. All I had was my rusted, jagged, 7-Eleven brand "razor" (issued to every nineteen year-old boy in the suburbs along with a Playboy and a copy of Frampton Comes Alive). And all they had was cold water. Ice cold water.

So what is one to do in the absence of a scented, alcohol-free, three-fold hot towel treatment? 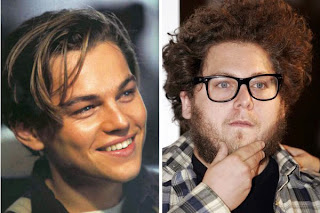 You can't begin the film looking like Leo and end up looking like Jonah
I'll save you the bloody details, but by the third day I resembled James Franco's arm in 127 Hours. The make-up woman hated me. I certainly could have used Steve and his mustache socks back then ... and now that I'm older and more experienced with The Art of Shaving (thanks to you, Groom), I finally have the chops to appreciate such royal treatment.

Bring on the chocolate mask.

Your pal,
Justin
Posted by Brian