The Art of Grooming (and a GROOM GIVEAWAY) 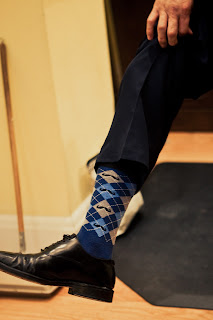 Who could forget the classic barber shop scene in Guys and Dolls ("The Oldest Established..."), in which a throng of half-shaven men and their barbers hop out of their chairs to join Frank Sinatra and Stubby Kaye in song. Shaving just isn't the social occasion that it was then; today we buy blades at Costco by the dozens and perform the act with haste and hustle, omitting the care and precision that men used to value in a shave. And none of us sing while we're doing it.

And yet, there's one institution that has kept the tradition alive: The Art of Shaving, a throwback to the 1940s barber shop that specializes in quality shaving products and offers manscape services at 23 Barber Spa locations throughout the US. I stopped by my local The Art of Shaving Barber Spa last week to clean up a bit and rediscover the art of fine male grooming.

I arrived only minutes before my 11AM appointment and browsed the store's products for a moment before being escorted to a room toward the back with faded canary-and-white wallpaper and wooden cabinets on both ends. A man named Steve (who fits the part to a tee, from his ash grey vest to his argyle moustache socks, pictured above) directed me to an antique barber chair on the near side of the room. Within seconds, the antique chair was reclined and the hottest hand towel imaginable was wrapped up and around my face. It's a good thing I trusted Steve and his 'stache socks; there's something very personal about toweling another man's face. 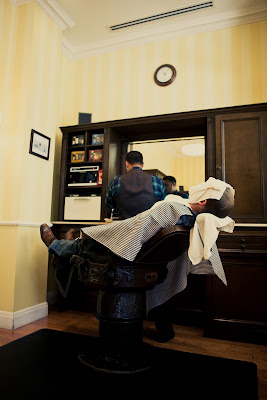 Toto, I don't think we're in Supercuts anymore.
My cheeks were just beginning to sweat beneath the cotton cloth when Steve clicked on (what must have been) the old-fashioned radio in the corner. Steve's all about Elvis and Sinatra; timeless music, he says, puts people in the right frame of mind. He removed the towel and began chipping away at my stubble with a straight razor.

Though it might add a few minutes to his morning routine, Steve follows this same procedure at home (hot towel to relax the pores, straight razor to shave). At some point he threw another scalding hot towel on my face -- this time with a lemon scent. Johnny Cash came on and I swear he was singing about burning lemons. 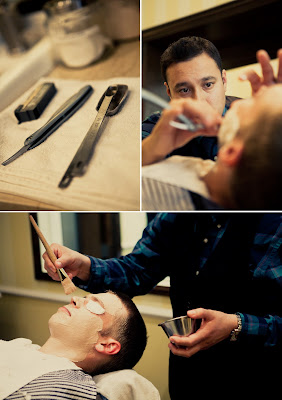 No cucumbers or Norah Jones at TAOS -- just crooners and
cotton pads.
After a detailed shave, Steve got to work on some vintage chocolate pudding -- or what was, in actuality, an after-shave mask that was painted onto my face, followed by yet another towel (this time ice cold and with a lavender scent). There I was, in the manliest place I can imagine, coated in a thick, rose-scented, deep cleansing cream that replenishes nutrients and guarantees a glowing complexion. The Chairman never had it this good.
The most unusual request Steve gets from his clients? "If I'll shave their chests. Or their legs." 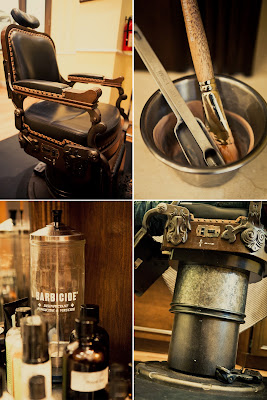 Clockwise from top left: the classic reclining armchair; not chocolate pudding; antique chair mechanics; the old school Barbicide and whatever else Steve thumb-dropped into my coffee.
It's no surprise that The Art of Shaving Barber Spas accommodate bachelor parties, pre-wedding celebrations and other man festivities on the weekends; I sent my own boys to the TAOS Midtown Manhattan location on the morning of our rehearsal dinner, and Boris (the Russian version of Steve; infinitely hotter towel) gave them the same royal treatment. They haven't shaved since. 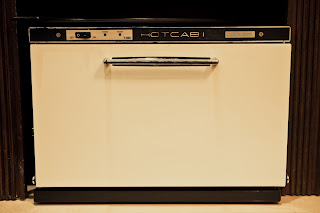 Inside this vintage towel heater? More moustache socks.
A huge portion of The Art of Shaving's business is their one-of-a-kind line of razors, badger brushes, shaving and skin care products. Fortunately, Store Manager Sean Covert was there to help us make sense of it all. Aside from assisting disoriented customers and providing useful information (for instance, that none of TAOS' products contain alcohol or synthetic dyes), Sean also provides shaving consultations for men who don't realize there is an art to a good shave. 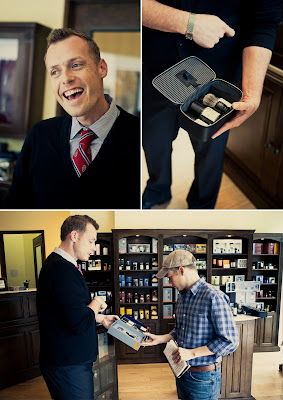 And for those grooms who find TAOS' balms and masks and essential oils to be too feminine (you know who you are), Sean says that Zirh's Platinum "Revive" under eye cream is a must-buy. No matter how masculine you are, no groom wants dark circles and bags under his eyes on his wedding day.
The Art of Shaving doesn't allow grooms to register at their stores (hint-hint, TAOS), but there are some amazing products and deals available. The best thing about the TAOS' product line is that full-size kits begin at a reasonable $100, and because items are sold a la carte, you can craft your own kit to meet your desired price point. Having said that, Sean recommends: 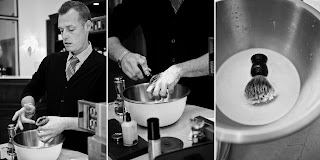 Sean demonstrates the "knuckle shave," an essential for bare knuckle boxers and hand models
But what could make The Art of Shaving more like a man cave and more suitable for bachelor parties and morning-of get-togethers?

No, I'm not suggesting that TAOS get a liquor license and set up an antique bar cabinet in the back room (though how sweet would that be?). But what about BYOB? Or, if that's not an option, what about a complimentary bottle of champagne for grooms and groomsmen who spent a certain number of dollars? After all, if a groom brings in seven groomsmen for a shave, they're bound to spend a good 2-3 hours in the parlor.

A flatscreen wouldn't hurt either, though I imagine an old pre-war tabletop television set would be more appropriate. SportsCenter was around in the 1940s, wasn't it? 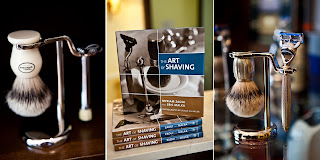 Gifts for the nostalgic groom, the modern groom and the groom who (for some odd reason) likes to read
***GROOM GIVEAWAY***
To prove their love and dedication to all things groom, The Art of Shaving has decided to gift a Royal Shave (a $55 value) to five Groom Says readers. Ladies -- this is the perfect wedding gift for your groom or anniversary gift for your hubby. Men -- did I mention there are three scented towel treatments? Need I say more?
To enter, simply leave a comment below detailing your (or your significant other's) most hilarious or horrific shaving experience. Be as general or as graphic as you'd like. The five most entertainment anecdotes will win a free Royal Shave at the TAOS location of your choice. The winner will be announced at noon (PST) on Friday, February 25th.*
Let the commenting begin!


- - -
Angelenos - to set up an appointment with Master Barber Steve Gonzalez, call the Century City location at (310) 785-3993.
Also follow Steve on Twitter at twitter.com/thelabarber.
All photos © Joanna Wilson Photography
(see all of Joanna's photos from our excursion on her blog)


- - -
The fine print: The prize is a complimentary Royal Shave courtesy of The Art of Shaving (5 prizes available). Prize can be redeemed at any one of the 23 Barber Spa locations across the country; visit http://www.theartofshaving.com/locations to determine if there is a Barber Spa location near you. Tip is not included and strongly suggested. Questions? Email me for more details.

*Winner will be announced at noon on Friday, February 25th. Winners must respond by Friday, March 25th, or the prize will be rewarded to a fellow contestant.
Posted by Brian