Breaking Up with Crate & Barrel

We've had good times, Crate & Barrel. We'd known of you for years, and we'd stopped in occasionally -- you know, when we had time to kill before a movie -- but we've grown really close these past 16 months. We had the whole registry thing, the registry brunch before that ... and then we hung out with your sister, which was initially kind of awkward but ultimately fine.

And now I feel like we're at that place where -- and this is really hard to say, by the way, but -- I think we've learned all that we're going to learn from each other, and we've spent all the money we're going to spend, and we've got to go our separate ways. 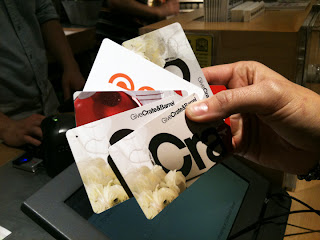 I know you felt it, too, when we were hanging out last weekend. It just felt done, you know. And we're not unappreciative. The new wok, the new salad spinner, the new vegetable cutting board with the collapsible strainer that fits right over the sink (and I mean right over the sink) -- you're really generous. You're practically my best friend.
But it'd be wrong to just ignore the fact that 2Es is totally obsessed with you, that she depends on you in a really unhealthy way, that she turns into a different person every time she re-prints and re-prints (and re-prints) our registry. 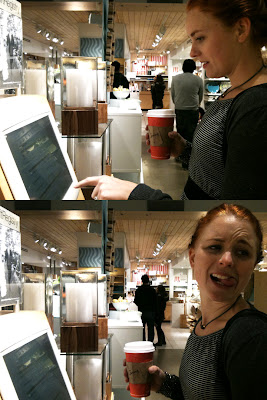 I sort of had an epiphany upstairs on Saturday. Sure, 15 months ago, I would have traded everything I owned for that Steamer Bar Cabinet. I would have sold my ass on the street for that vintage home bar with the built-in wine rack and the removable separate tray and the uncanny ability to swivel.
But I've grown up, CB. I said, Do we really need this? And in the end, I agreed that 2Es' decorative leaning bookshelf that doubles as a vanity was simply more cost effective.
(And I don't use words like cost effective.)
So so long Crate & Barrel. I'm sure we'll run into you online from time to time. Just know that we'll be thinking about you and using all of the awesome crap you gave us. And tell your sister I said sup.
Love,
Madman
Posted by Brian