The Couple That Bakes Together ... Bakes Stuff Together

For Valentine's Day, 2E's treated me to a couple's baking class (advertised as "Champagne and Chocolate Decadence") at the Kiss My Bundt Bakery here in central LA.

Her gift turned out to be more than appropriate when I baked some blueberry and chocolate chip muffins on V-DAY morning and managed to omit the baking soda. Valentine's surprise FAIL.

En route to the bake shop, I feared a round-table setup where we'd have to introduce ourselves and share our feelings and close the session with a supportive round of applause. Couple's therapy, with spatulas. 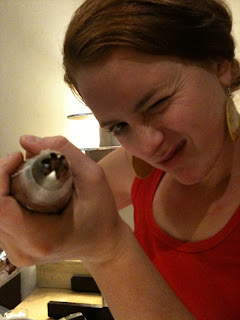 But despite my fears (and despite our tardiness), 2E's and I had an amazing time -- killing a few bottles of champagne with our cohorts and sampling anything and everything in sight. Kiss My Bundt owner Chrysta Wilson walked us through some of her favorite recipes and helped us put together a righteous chocolate cake with rich buttercream frosting and a chocolate ganache topping. Leaving the storefront roundabout midnight, boxes of mini chocolate bundt cakes under our arms, we were 100% satisfied. And about 40% drunk. 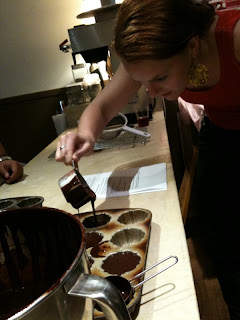 After the class, Chrysta filled me in on the world of wedding (bundt) cakes ... a world I didn't even know existed. Brides and grooms are considering dessert options outside of the traditional wedding cake - and two of those options happen to be (1) mini bundt cakes (an alternative to cupcakes) and (2) tiered bundt cakes. The mini bundt cakes -- which can serve as either an accompaniment to the wedding cake or as the full-on dessert -- are surprisingly affordable and come in a variety of flavors. Chrysta says her most popular flavor as of late, even with the most conventional brides, is the Maple Bacon cake, a Kiss My Bundt original in the "sounds nasty but is actually delicious" category.

So grooms ... if you happen to be headquarted in Los Angeles, perhaps you should suggest mini bundt cakes to your bride as a fashionable alternative. Swing by Chrysta's storefront, pick up some of the best red velvet cakes in the city and impress your bride with an unexpected treat. 8104 West 3rd Street, Los Angeles, CA 90048. (323) 655-0559. 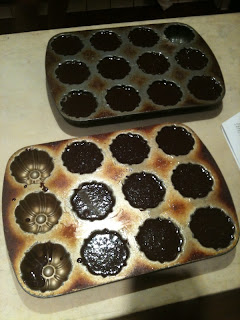 A quick shout-out to our new friends -- Darian and Ron -- who baked alongside us and will be tying the knot in August in Culver City. To paraphrase Darian: "I wanted to include him, so I asked him -- what does he want to see at the wedding? And he said,  'Well, I like swords, ninjas and comic books.' So I made him a ninja cake for Valentine's Day." To quote Ron: "It didn't have nunchucks or anything, but it was pretty cool."

Ron is officially my new favorite groom. Good baking with you, Ron.