Our friend Teresa has a bit of a challenging problem. And not that she has a problem that is challenging, but rather that she's a compulsive challenger. Being a fellow blogger (as well as 2E's distinguished Maid of Honor - more on that later), Teresa thought she could stump me with an odd blog request:

What if you were one of those people on house arrest -- the ones with the ankle bracelets -- but you still wanted to get married? You'd have to do everything local ... like 2 or 3 blocks local.

We coined this rare circumstance a "Martha Stewart Wedding." Then we applauded our own cleverness for two hours straight. 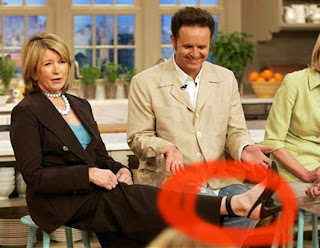 After coming down from our ego trip, I thought about how a couple might make that work ... if, for instance, the braceleted bride could travel no more than 1,500 feet from home. Would it be possible?

To find out, I purchased a home detention kit on Amazon.com and Velcro-ed on the black tether anklet. 2E's then released me to the streets, into the wild, monitoring me as I traveled within a 1,500-ft radius (approx. 0.3 miles from home). She and I could communicate back-and-forth through the electronic monitoring device, and if I ever went outside of said radius -- or attempted to remove the device -- the sensor would sound and she would promptly alert the authorities. Amazing to think that I was only arrested once. 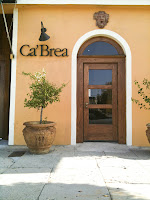 We might not know the difference between Antipasti, Insalate and Paste, but this place has bruschetta and that's all we need to know. Besides, if Mom weren't a full-blooded Cuban, she'd be an Italian without hesitation. And with breadsticks. 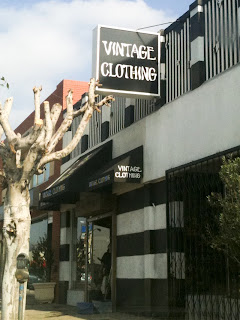 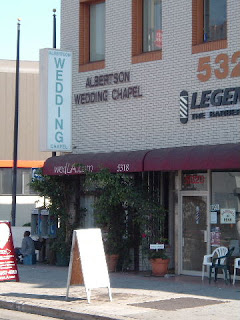 According to their website (which has the most anxious html ever - www.wednow.net), the all-in-one Albertson has been providing "tasteful and affordable weddings in Los Angeles since 1974."

But the best thing about the chapel is that they can add anything to your bill for a nominal fee: marriage license, $79; live cellist, $125; bouquet and boutonniere set, $85; standard video, $99; free fresh flowers in the chapel ... priceless. 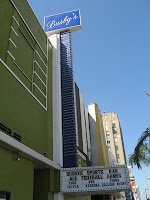 Busby's has a bar. Busby's has pool tables. Busby's has a men's and a women's bathroom. It's got it all. And though our guest count might double in size when we factor in the bar staff, wait staff and the "usuals," we'll have enough flat screen TVs with SportsCenter to go around.

Look at those values! $5 for all those subs?! That's ludicrous! And if we come in a little under-budget, you better believe we're going to get some avocado on the side. 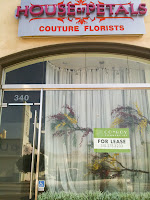 Taking into account the "For Lease" sign on the window, it doesn't appear that House of Petals will be on La Brea much longer, but we're hoping there'll be some couture floral leftovers out back.

And if the House of Petals doesn't work out, our backup -- the local Ralph's supermarket -- is right down the street. Ralph's got some sweet orchids. And I've got the Club Card, so it's ... like ... cheaper. 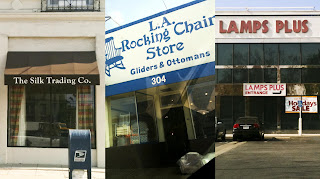 Three storefronts all within 1,000-ft of one another. After this Martha Stewart Wedding is complete, people won't be able to shut up about that silk-gliders-&-lamps shindig at Busby's. 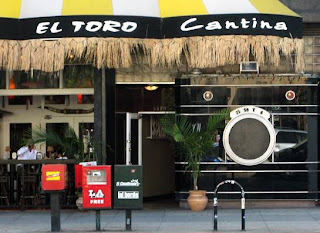 I've never been to El Toro, but the place has a circular window, potted palms and the word Cantina in its name. Enough said. 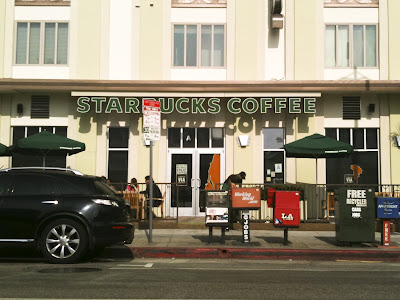 So it's not on the water or luxurious or even private ... but there is a romance about Starbucks. Leather club chairs, good customer service and -- let's face it -- the Peppermint Mocha is back, and we haven't given that enough attention.
Posted by Brian