No, it's not a wedding announcement, per se. But the fact that it's happening in the midst of our engagement bumps 2E's excitement level up to 13. Out of 10.

You heard it here ... my bride-to-be is being featured in Oprah Winfrey's consonant-free, monosyllabic, uni-letter-al magazine, O, in an issue that hits newsstands I have no idea when. 2e's is being honored not only for her role as an independent, female business owner but also for having the most cluttered workstation in the Los Angeles area. And that includes Orange County. Eek. 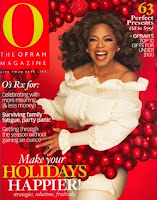 This should come as no surprise. I mean, planning a wedding alone is enough to leave your desk in a constant state of disarray. Currently our makeshift workstation is supporting a thousand post-it notes from a thousand phone calls with a thousand different vendors, along with quotes, contracts and agreements, reminders, "inspiration," magazines, magazine subscription forms and a handful of unidentifiable "stuff."

But it's not only the wedding -- 2E's and I both have our day jobs, both have our acting careers, and on top of it our joint photography business. Depending on what's on the top of the pile, we're entirely different people.

I imagine 2E's will sneak it into the interview -- the fact that she'll be an honest woman come October next year. And that I'll be an honest man. And that, if the readers of the vowel-loving O Magazine happen to read this here blog, they should remind themselves that only about 20% of what I write is honest. Honestly.
Posted by Brian