Being Productive & Being Secretive

It's been a bit of a whirlwind since we arrived in 2E's hometown of Chapel Hill, NC, early Wednesday morning. There's that old wedding proverb -- "When the mother of the bride is involved ... shit get done."

Knowing we would most likely get a better deal on bling here rather than LA, we stopped in at Wentworth & Sloan, a 60-something-year-old local jewelry outlet, and had our bands picked out and ordered within an hour. Then, after locating $35 worth of store credit (dating back to 1996), we spent a spare hour at The Bookshop, Inc. on historic Franklin Street. Combing the sale shelves, we had the good fortune to find a bruised and battered collection of Shakespeare's work printed in 1910 or thereabouts, and we realized that these worn, antique classics -- serving as table numbers -- could be the one design element that ties the reception loft to our bookstore ceremony. 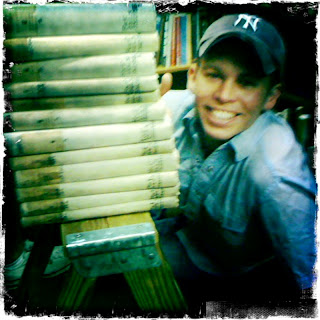 2E's and I also sat down with our officiant, Uncle Phill, to have a more in-depth discussion about the flow of the ceremony, and with our Welcome Basket Coordinator, Aunt Robin, to finalize the contents of the out-of-towner tote bags.

But as much as we accomplished -- under-budget on all accounts -- it all takes a backseat to what is happening at this precise moment in time, and that would be: 2E's Super Secret Bridal Shower.

The MOB and 2E's Aunt Robin phoned me a month ago (using code names Beatrice and Aunt Bea) to fill me in on the details of this pending shower. The two of them, with the aid of some other relatives and godmothers, had been planning to host the shower here in Chapel Hill for some time and needed me to confirm travel dates, expand on their guest list and vow to keep it all on the down-low. Beatrice and Aunt Bea can be very persuasive.

So, yes, as awesome as it is that our table number decor was essentially free thanks to 14-year-old store credit, barely legible on 3x5 postcards, the last three days have really been a lesson in lying our way to secrecy. See, all the women in 2E's life are in town, stashed in various homes, and gifts are strewn about her mother's house, topped with blankets or tucked away in closets or beneath whatchamacallits. People had to be at certain places at certain times to pick up other people at certain airports, etc., etc., and 2E's couldn't know any of it. It's all very MI:2, very Truman Show. We all keep asking ourselves, "Does she really still not know?" 2E's has been inquisitive and curious and especially nosey, but we've managed to keep her in the dark despite some minor slip-ups that we've corrected through discreet text messages. 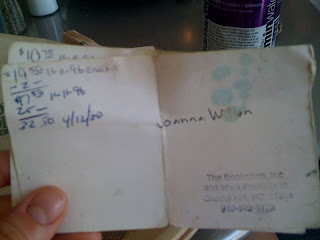 Faded, water-damaged, dating 1996, and STILL worth $32.50
It reminds me of that old adage -- "The best laid plans of mice and men often go awry, but when the MOB is involved, you best not say shit to no one about this bridal shower."

So while the FOB, 2E's brother Patrick and I get a headstart down to our beachhouse on Oak Island, 2E's is -- as we speak -- doing untold things in a room full of women. Beatrice and Bea have staged a How Well Do You Know Your Groom? quiz, with a video presentation featuring yours truly (a la The Dating Game), and as prize for her efforts, she will receive a Bride Points Scorecard, a variation on the Groom Points Scorecard, which I designed for her (undetectably) over a week ago.

But that's only one component -- only one of the many humiliating things she'll be asked to do for the sake of bridedom, and I can now say resolutely, with absolutely certainty, that I am thrilled that there isn't a groomal shower in my future.
Posted by Brian