When you get to this stage of the wedding process -- I guess you'd call it the final stretch, though that's incredibly terrifying -- when you get to this stage, you begin to realize that the wedding you've created together (the wedding that's playing out in your head and in various email chains) is the result of a bunch of tough decisions. Even the most basic questions: who, what, where...? Who are we bringing to this thing? Where are we doing it? Who's going to marry us? What the hell is up with the expensive photobooths? Why do I have to choose between white and ivory votives -- aren't they the same thing?

And every now and then, you and your bride tip-toe through the cutting room floor of your wedding, checking out the could-have-beens. Like ivory votives. Like a traditional cake. And there in the center of the room are all of the venues that could have been: the over-budget venues; the unimpressive venues; and that spectacular barn on a river somewhere in North Carolina. 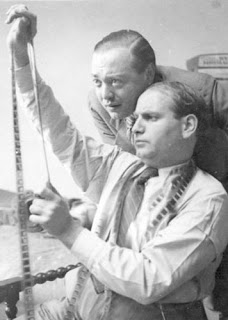 I just don't think those linens work, sweetheart.
Standing around ogling, loitering, judging you, are all of the vendors you chose not to employ. The caterers; the calligraphers; the bands whose samples you listed to for hours on end. Photographers holding framed images of the processional, the recessional, the farewell. They're all there.

Strewn around the room are thousands of dresses and shoe boxes -- the gowns and heels and accessories that your bride considered but ultimately never bought. This is your bride's worst nightmare. If you're not holding her hand, you should be.

And I guess the most important thing is that you know when to leave, to let it go. It's easy to reflect, think about all of the routes you didn't take, the design decisions that (for whatever reason) you voted against. You may drop in once in a while to reintroduce an old, discarded idea. But in the end you just have to accept that that barn on the river was never the right space for you; that those caterers were too cookie cutter; and that the ivory candles, as ridiculous as it seems, were far inferior to the crisp, clean white candles.

Yesterday, our day-of coordinator (Elif Aksoy from My Big Day) offered to stop by our ceremony and reception venues to get a feel of the spaces, visualize the flow of the wedding and snap some photos for us. And this is the email we received late in the day:

"You guys did AMAZING! Really! Please congratulate yourselves on your incredible venue picks both for the reception & ceremony. ... I just wanted to touch base with you quickly to say that you guys are going to have the most unique & fun wedding! We are so excited to be even a small part of it."

And that's just another reason why we love Elif and are so enthused to have her as part of our wedding team ... because, while we may be doubting ourselves and shuffling through the could-have-been bins, she's there to remind us that we kind of know what we're doing and that all of those tough choices we've made are actually starting to make sense. It's all starting to come together. Especially the votives.

Christ, I'm like obsessed with votives now.
Posted by Brian