Much thanks to 2E's Aunt Sheryll for passing along the following CNN piece on wedding cutbacks:

Bowling alley wedding: How creativity is priceless in a bad economy

Oddly enough, 2E's and I had considered (in fact, we'd fallen in love with the idea of) having our rehearsal dinner at the contagiously hip Brooklyn Bowl in Williamsburg, but the total cost with space rental fee + in-house catering + open bar exceeded our budget. Go figure. (But new york brides and grooms - if you have the money to spend, it's worth checking out.) 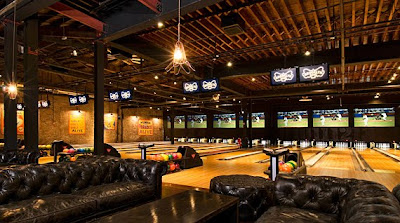 The laid-back, warehouse vibe of Brooklyn Bowl
While chatting with my sis on the phone this weekend, she described our wedding (very cautiously) as "anti-traditional," and I think that characterization is right on the nose. It's not that we're mocking tradition in any way; we're just not confined to wedding precedents. We march to the beat of our own drum -- a phrase I've never used until now because it makes me sound like the disgruntled mother of an angsty teen.

Working in an "anti-tradition" atmosphere has given us the freedom to infuse our creativity into the process and treat the wedding as a blank slate rather than a set of rules to which we must conform. And that creativity, that blank slate -- as Ms. Chen points out in her article -- has dropped our costs significantly (see For the Kid in All of Us).

For brides and grooms just starting out -- you may want to begin with your idea of a traditional wedding. Look at each component and decide if it's something worth holding onto or improving or eliminating entirely. Much of what we're planning for our event came from putting our own spin on a traditional element. So I guess in that sense we're not "anti-traditional" at all. Just "traditional with a twist." A phrase I've never used until now because it makes me sound like the douche-y bartender from an 80s-era John Hughes movie.
Posted by Brian

Email ThisBlogThis!Share to TwitterShare to FacebookShare to Pinterest
Labels: Bowling Alley Wedding, Brooklyn Bowl, For the Kid in All of Us, The Groom Says, Tradition, Traditional with a Twist