Fellow groom and longtime friend Ulises is losing his independence on March 13th in Captiva (a small island off the coast of Florida). As a groomsman, it's my responsibility not to plan or coordinate or arrange ... but rather to bug and pester him (and best man Alex) about the pre-wedding festivities. 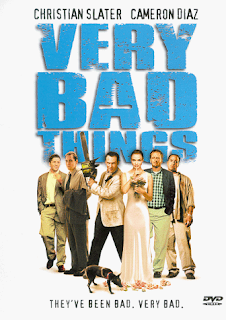 Come the end of January, I may very well be in my '98 Sebring convertible, top down, driving through the desert to the b------- p---- capital of the world: Vegas. Made popular by Peter Berg's Very Bad Things and, more recently, by The Hangover, Vegas is where the betrothed go to bid their freedom farewell (and also to forget the hours between 11PM and 8AM). The hope is that, should we decide on the Strip, I'll be fortunate enough to document our trip--from the hotel room to the nightclub(s) to the casino(s)--and use code words where needed.

While in Miami, Ulises confessed that he'd been to one "gentleman's club" b------- p---- that still gives him nightmares; the throng of under-dressed women pulled the groom onto the stage platform, stripped him of his clothes and drew concentric circles around his unfortunate man-breasts (now prominent with hot pink magic marker), at which point he was forced to dance and frolic about the stage. His gentlemen guests sat around the stage, troubled, disgusted, dreading what might come next, knowing that there was no hope in saving this evening.

And my only question is, What the hell?

What kind of twisted send-off is that? What groom would actually enjoy that? I humiliate myself plenty already ... I certainly don't need a team of magic marker-wielding exotic dancers to do it for me. Rather than disrobe the man and accentuate his man-boobs, how about:
I guess I wouldn't call any of those Very Bad Things -- unless someone were to totally murder that bedroom scene -- but it would be an educational evening. And isn't that what a b------- p---- should be?

Oh well. Take us out, Minnie:

SKYLAR
You're the one that's afraid.

WILL
What the fuck am I afraid of?

SKYLAR
You're afraid of me. You're afraid
that I won't love you back. And guess
what? I'm afraid too. But at least
I have the balls to give it a shot.

(Will begins to cry in a South Boston accent.)