Donald is no groom. Donald has crossed over. Donald is a husband.

The anniversary is a concept so distant and intangible -- like that mythical kingdom that stands beyond the Planning Mountains, through the Valley of Last-Minute Changes and just over the Rehearsal Dinner River -- you wonder if you'll ever get there.

Believe it or not, on this Halloween, Donald and his wife Laura are celebrating their one-year anniversary. I was hoping to trail them as they trick-or-treated in their torn, muddied wedding attire -- perhaps with tire prints streaking across their chests, working the "run-over newlyweds" theme -- but we agreed instead on a chilling question-and-answer with Donald himself. It took two dozen candles, a Ouija board and a lot of patience, but we managed to summon Donald back to the land of the living and asked him for some advice on making the big leap, following the white light and eating unwrapped candies.


DONALD, THANKS FOR MAKING THE TRIP.  TELL US ... IS CHANGING YOUR FACEBOOK STATUS REALLY THE SCARIEST THING ABOUT GETTING MARRIED?
Laura immediately wrote "marked territory" on my Facebook wall ... and a few times on MySpace. It's the first thing listed under my profile picture, and it has a link to the wife's page. It’s even listed before my current city. Scary. 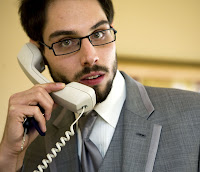 SPEAKING OF SCARY, YOU GOT HITCHED ON HALLOWEEN...? ANY SPOOKY WEDDING MEMORIES?
It was better than we ever could have imagined.  We had such great people surrounding us.  I even had the sense that all my ancestors were watching from above - the sunshine literally shined down on us like a spotlight during the ceremony.  As we turned around to walk down the aisle, we couldn't even see our audience of friends and family because we were blinded by the light.

WOW, WERE THEY SPYING ON YOU AT THE RECEPTION, TOO?
No, but the location was perfect. We were in an old school mansion with this very creepy vibe.  We even had an after party back at the hotel, so we didn't shutdown until after the sun came up.

AND I’M GUESSING MJ’S “THRILLER” MADE AN APPEARANCE AT SOME POINT?
YES! We entered the reception to Thriller! We found a DJ who shared our taste in music, so we were in good hands. 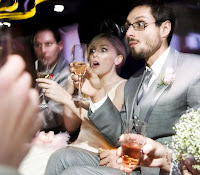 The one thing that caught us off guard was when we realized we had forgotten to practice a dance. And when I say practice, I'm embellishing … as in, we didn't even talk about a couple steps. Laura and I realized this during some photos we were taking outside while all our guests were having cocktail hour. So I was like, “No it'll be fine, come here, we’ll just do this,” … and I stepped on her dress and almost dropped her.  I had knocked off her veil during the ceremony at one point also, so here she is thinking, I just married this guy who knocked off my veil, can't hold me, steps on me, doesn't remember to learn how to dance, and this is FOREVER?!

So my advice: practice the dance. And don't try to run your hands through her hair when she's all done up. Don't even put your arm anywhere near her hair. Or her head. And don’t step on her.

WE’RE TAKING NOTES. ANYTHING YOU WOULD HAVE DONE DIFFERENTLY ON THE DAY-OF … BESIDES LEARN HOW TO DANCE?
The hardest part of the wedding was making sure we said hello and thank you to everyone. There were some guests I’d never met, and some she had never met. In hindsight, I would have asked a good friend to help out with that.  If you’re going to go from table to table then perhaps that good friend can trail you with  a checklist and cross people off the list as you go.

OR MAYBE YOU COULD CLONE YOURSELF? ONE OF YOU COULD GREET WHILE THE OTHER ONE EATS?
We were forced to eat! I ate a light sandwich a couple hours before the ceremony, and I wasn’t hungry until the reception ended.

It’s like this high … this feeling of getting married. I was nursing drinks the whole night. I know my groomsmen all wanted me to get drunk the night before the wedding, but I went to my room and listened to some classical music and went to bed early. The next day I was so full of that I'M GETTING MARRIED energy. 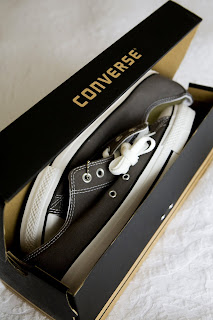 DID YOU HAVE TO FIGHT FOR YOUR CHUCK TAYLORS?
It was a fight! Laura wasn't keen on the idea when I brought it up, but (a) I hate dressing up, and (b) the two things I cared about were shoes and music, so she agreed. Her mom and her grandmother were the most concerned. They cried every time it came up. They would try all sorts of tactics like, "I thought we already decided on that," but I held my ground. Not once did I apologize for it. I had all of my groomsmen wear the same matching pair. The priest arrived and saw all of us and he just laughed and said "CHUCKS!!!" I think he liked my style.

ONE-YEAR INTO MARRIAGE ... IS IT MORE ABOUT THE BIG CHANGES OR THE LITTLE CHANGES?
We'd been living together since we first met -- started out as roommates, then moved into the same room when we starting dating, then got our own place three months before we tied the knot. So we got the big changes out of the way early. The biggest change is that now we’re a real family.  So when holidays come up, we don’t go separate ways. Her family is mine and mine is hers and that’s a really cool thing.

The little changes are sometimes the more annoying ones.

HMM. I THINK YOU NARROWLY ESCAPED A NIGHT ON THE COUCH WITH THAT ANSWER.
I do annoying GUY things, she does annoying GIRL things, its just how it goes.

THE TRADITIONAL FIRST YEAR ANNIVERSARY GIFT IS PAPER (WE LOOKED IT UP) ... WHAT DO YOU HAVE IN STORE FOR THE MISSES?
Am I supposed to get a gift? Really? Christmas is, like, right around the corner. ... Actually, the wife reads your blog, so I can’t spoil the surprise. Call me on the 31st and I’ll fill you in.

CONSIDER IT DONE. ANY TIPS FOR ALL THE FRESH-FACED GROOMS OUT THERE?
Run. Run to Tiajuana. Or Vancouver. Whichever is closer.

I’ll share a piece of advice someone gave to me before the wedding: remember to stop for a minute -- just you and your bride, during the reception -- and just look around and take it all in. Cause it all goes by so fast, from the moment we’re down on our knee and she cries and says yes, to when she says, "I do," and suddenly you’re back home unpacking from the honeymoon. It’s like a 3-minute roller-coaster. So don't forget that. 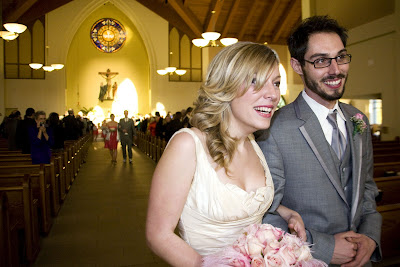