I've never seen or heard of a party as awesome as the party I was having in my car this morning. Pedestrians and passersby peeked in through the windshield, wondering if and how they might gain access. Fellow drivers rolled down their windows in envy. I became jealous myself at one point when peering through the rear view mirror -- but soon realized that it was my own party I had become jealous of.

As I mentioned earlier, our man DJ Gaza gave us some sample CDs when we first met so we could get a taste of his music. I took this morning's drive-to-work as an opportunity to sample some of his musical stylings. And let me just say ... I always knew there was a way to meld Run DMC, Stevie Wonder and The Clash, and today ... Gaza showed me the way. 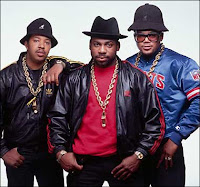 I would gladly pay this man a fixed annual fee to provide me with a weekly or, better yet, daily wake-up mix. With a contract signed and a deposit down, 2E's and I have one element of the wedding that we can officially remove from our to-do list until August, when we email Gaza and remind him that country music will have no place at our festivities.

Now on to the 400 elements that have not yet been removed. Officially.
Posted by Brian

Email ThisBlogThis!Share to TwitterShare to FacebookShare to Pinterest
Labels: DJ Gaza, Party In Your Car, The Groom Says